The Galleries at CSU Announce New Exhibitions for Spring 2015

Mind Creatures: The Amazing World of Marvin Jones; Place and Vision: The Artistic Legacy of Masumi Hayashi and Only Human: Wrestling Entropy on display January 15-March 7 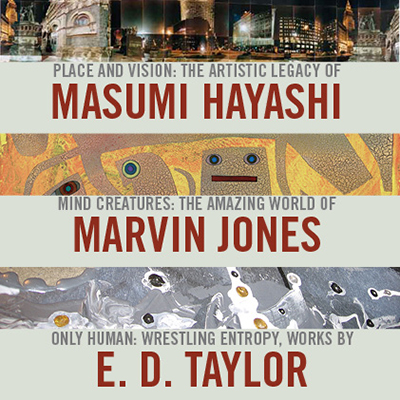 The Galleries at CSU announce three new exhibitions to open the spring season: Mind Creatures: The Amazing World of Marvin Jones, Place and Vision: The Artistic Legacy of Masumi Hayashi and Only Human: Wrestling Entropy.

The exhibitions, free and open to the public, will be on view from January 15 to March 7 at The Galleries, located at 1307 Euclid Avenue. A special opening reception is planned from 5 p.m. to 8 p.m. on January 15.

Mind Creatures: The Amazing World of Marvin Jones (curated by Russ Revock) and Place and Vision: The Artistic Legacy of Masumi Hayashi (curated by Michael Gentile), on display in the North and South Galleries, honor the lives and works of former professors Jones and Hayashi.

Jones, a professor of printmaking in the Art Department, died at age 65 in 2005. His exhibition features prints, paintings and 3D works from various periods of his career — from early, meticulous etchings influenced by underground comics and the Chicago Imagists of the 1960s to lithographs bearing the immediacy of primitive, “outsider” art to digital prints that represent some of the last works he created.

Hayashi, who taught photography, passed away at age 60 in 2006. Her work features large-scale panoramic collages that include subjects such as Superfund Sites, the city of Cleveland, Japanese relocation camps, sacred architecture and more.

Both professors were deeply committed to arts education and loved their students, developing lasting relationships with many of them throughout their careers.

Only Human: Wrestling Entropy, housed in the Center Gallery, features the works of E.D. Taylor, a local artist whose thoughtfully-crafted collage paintings and sound sculptures address themes of the human condition. Taylor works with all kinds of media exploring the psychological cabinet of curiosities that is contemporary culture. Special talks with Taylor are planned for 6 p.m. on January 15 and at 2 p.m. on February 7.

The exhibitions are presented with the support of CSU’s College of Liberal Arts and Social Sciences and The Ohio Arts Council.