Carlson Jones uses the lens of filmmaking to fuel creative inspiration in all areas of her life. “Movies showcase the world around us,” she said.

That’s how the rising senior at Beaumont High School in Cleveland Heights found her way to Cleveland State’s Odyssey film camp this summer. 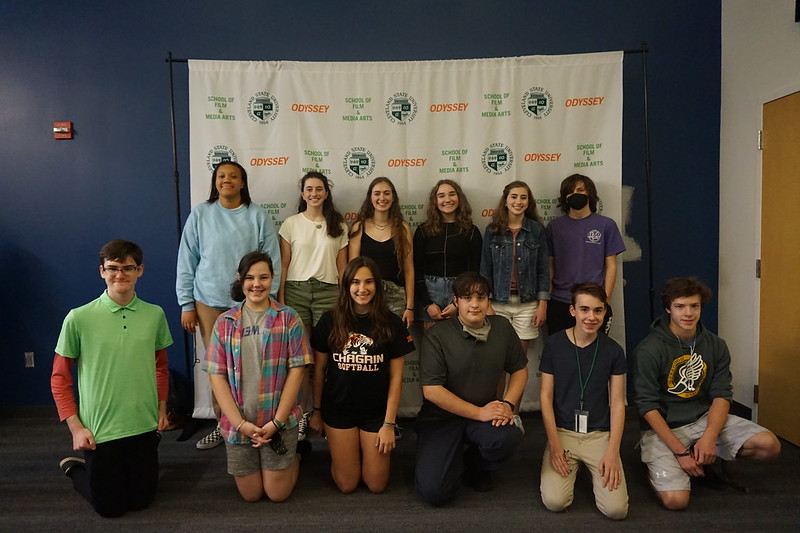 The Odyssey camp –  run by CSU’s School of Film & Media Arts –  invited students ages 13-18 on an “experiential” journey to learn everything they need to know about film, plus lectures with field experts, hands-on workshops for topics like light composition, and even practicing special effects make-up on each other. And, of course, there was movie watching – handpicked by the camp staff.

For 3 weeks, Jones and her fellow campers, including Nora Konrad, were fully immersed in film. Konrad, a rising senior at Shaker Heights High School, said that working through every stage of film production helped her realize which parts of film she enjoyed most.

“I’m not so sure what I want to do yet,” Konrad shared. “I know I love writing and directing, but this camp has showed me that there are a lot of opportunities.”

But their best opportunity? Making their own short films using industry-grade equipment.

Each of the twelve campers conceived and directed original pieces, ranging from three to 10 minutes long. The young filmmakers had their fellow camp

members (along with cameos from some camp staff) act in, produce, direct, edit and shoot the films, making each unique film a collaborative effort. The films also ranged in genre — from coming-of-age to music video to horror.

Konrad said she especially enjoyed location scouting and writing her own screenplay.  “It’s cool to use the CSU facility to let our visions come to life,” she said.  And come to life is exactly what the films did on July 2 at the screening event, marking the end of the Odyssey camp. Family, friends, counselors and the campers themselves gathered in the film school’s theater to give the students the spotlight they earned.

After three jam-packed weeks, the campers huddled together in the back of the theater to finally view the completed short films. They made noises of anticipation when they knew a good part of the film was coming and giggled when a part of the film reminded them of an inside joke. By the time the credits rolled for each of the films, they erupted into applause and cheers, proud of the great work they and their friends and film collaborators had accomplished.

Odyssey camp director Valerie Temple said, although bittersweet, the screening on the final day is her favorite part of the camp.

“It is incredibly gratifying to see the students’ work on the big screen and see just how much they’ve learned about film and filmmaking during their time at camp,” Temple said. “I am always amazed by the talent and creativity displayed in these short films and I love being part of their journey to future success in the film industry.”