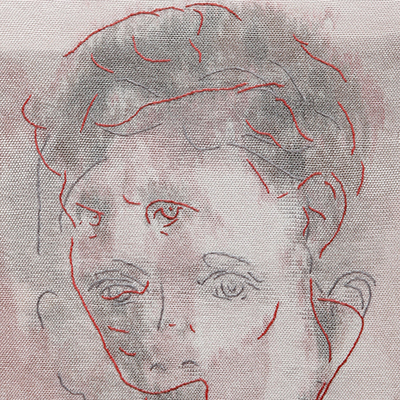 For its first exhibition of 2017 the Galleries at CSU presents the work of four unique artists, all of whom have earned national notice for their innovative contemporary art styles and efforts to better explain the human condition. The show, which runs from Friday, January 20 through Saturday February 25, will feature a wide range of artistic works including an installation of embroidered dresses by Anne Kmieck, dyed tencel weavings by Miriam Norris Omura, geometric abstractions by Susan Squires, and a film by independent filmmaker Robert Banks.

“While there is much diversity in method, media and content in these exhibitions, all of the artists engage our senses and our minds in the pursuit of understanding meaning and self in the 21st century,” says Robert Thurmer, Director of the Galleries at CSU. “There is much here to be seen, felt and understood, both on a deeply personal level and on the scale of universal truths.”

The Galleries will host an opening night reception including a Gallery Conversation with the artists, on Friday, January 20 from 4 p.m. followed by a reception with refreshments from 5 to 8 p.m. at the Galleries, 1307 Euclid Avenue, Cleveland. The event will also feature the dance performance Illuminations of Identity by dancers Kathy Diehl, Jenna Hanlon and Lisa Yanofsky, with musician Mike McNamara.

With Riparazioni (Reparations): Meditations on the Fullness of Being (Woman), and other works, Kmieck installs hand-embroidered Christening Gowns in juxtaposition to other meaningful handcrafted articles that pay homage to eleven historic women who made significant contributions to the Church and society. In exploring their brave and fortitudinous, and in some instances, tragic lives, Kmieck gives further meaning to the female existence by allowing the viewer to be touched in a deeply spiritual, as well as a genuinely esthetic way.

In Ghosts and Strangers, Omura adapts a weaving – dying – re-weaving technique pioneered by Hildur Asgeirsdóttir Jónsson who she studied with while living in Cleveland. Using personal, historic photographs as a starting point, she explores her family history and what gets lost in translation. As each image is transformed in the process of re-weaving, a new, perhaps more personal, interior aspect of the subject is allowed to reveal itself.

Squires introduces a new body of work in an exhibition titled From There to Here. Her encaustic/mixed media works are typically quiet meditations with psychological and spiritual implications. Her influences range from literary and musical passages, current events, landscape space and growth forms to architecture, archetypical images and symbols and most recently geometric systems. Both rational and intuitive, the pieces are "poetic" interpretations of subtle states of being.

Banks presents Paper Shadows, a film exploring the polemic issues of race, gender, class, exploitation, and the ubiquitous, distorted, and often infuriating images of these subjects littering the culture of mass media. Using both old-fashioned and state-of-the art filmmaking techniques, he creates a moody and insightful testament to unseen and largely unacknowledged aspects of life in Cleveland in the second decade of the 21st Century.

“It is our hope that these exhibitions will cause visitors to pause and contemplate the artists’ vision and their own lives while providing new insights into society as it is,” Thurmer adds.