As members of the Horizon League, Cleveland State University and the University of Illinois at Chicago annually square off against each other to determine who reigns superior on the athletic fields. The two universities’ cities are now vying for a bigger prize – a World Series championship.

The 2016 Series begins Tuesday in Cleveland, pitting the Chicago Cubs against the Cleveland Indians, two teams who collectively have not won the Fall Classic in 174 years. But one team’s streak will soon come to an end.

Cleveland State President Ronald M. Berkman is so confident the Indians will be victorious that he is willing to wager UIC Chancellor Michael Amiridis, putting up one of Cleveland’s most prized possessions, a case of Bertman Original Ballpark Mustard. Amiridis enthusiastically accepted the challenge, countering with a Chicago tradition, deep dish pizza. 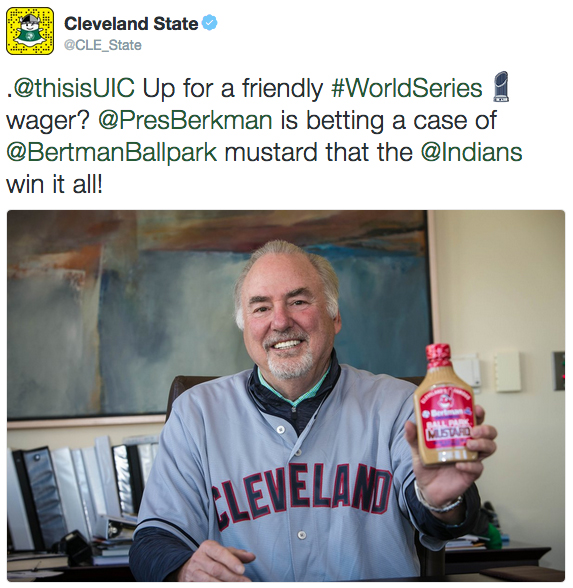 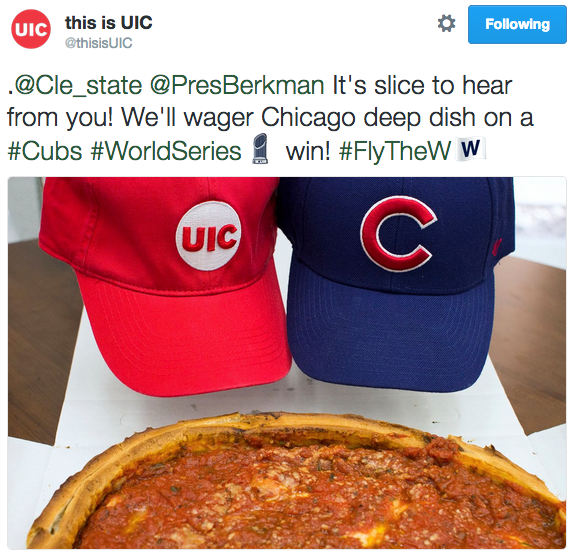 “Cleveland is on a roll, and I am confident the Indians will follow the Cavaliers and bring a second championship home to our city in 2016,” Berkman says.

Berkman previously bet Kevin McCormick, president of Huntington University in Ontario, Canada, that the Indians would defeat the Toronto Blue Jays in the American League Championship Series, winning a case of Canadian maple syrup in the process.

Since relocating to Chicago less than two years ago, Amiridis has been faithfully following both the Cubs and the crosstown White Sox. With the South Side Sox waiting for next year, Amiridis’ attention is focused solely on the Cubs.

“The entire city has been captivated by them the entire year. They won more than 100 games with great pitching, offense and defense. I’m confident the World Series trophy will end up in Chicago,” said Amiridis.

The Cubs last won the World Series in 1908, at the spot that now houses the UIC College of Medicine. The ballpark was called West Side Grounds and was the Cubs’ home from 1893 to 1915. The Indians last won the World Series in 1948 and the city of Cleveland suffered a 52-year championship drought which was finally snapped when the Cleveland Cavaliers won the NBA title in June.