CLEVELAND (Wednesday, May 13, 2015) – A new report from the influential Brookings Institution lists Cleveland State University in the top three among Ohio's four-year public universities that give graduates the largest boost to career earnings.

According to the report, CSU graduates have mid-career salaries that are more than $10,000 higher than those of demographically similar graduates from other colleges and universities ­– the third highest percentage boost in a grouping of Ohio's four-year public universities, following only the University of Cincinnati and Miami University.

"The results of the Brookings report affirm the quality of our programs and provide further evidence that seeking a CSU degree is a great investment," said CSU President Ronald M. Berkman. "These measurements account for CSU's ability to deliver a transformative experience that is accessible and affordable." 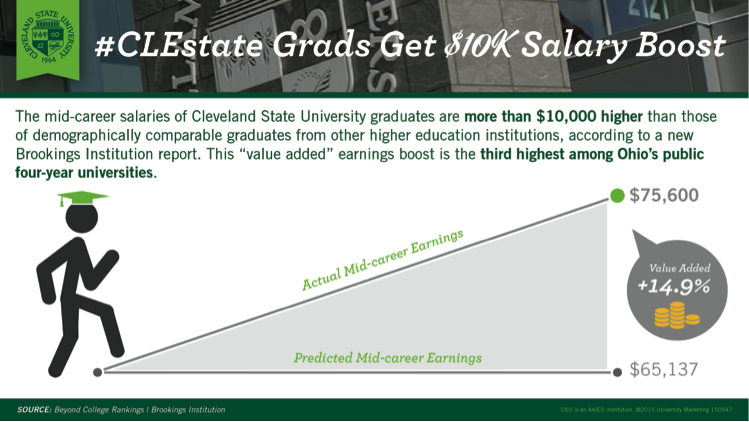 The Brookings Metropolitan Policy Group used a unique methodology intended to provide college applicants with a resource for evaluating choices based on value added to career earnings, a different approach from rankings that heavily weight subjective reputation and admissions selectivity in their methodology. The Washington-based organization is consistently ranked as the most influential and most trusted think tank in the U.S.

Brookings researchers found that students from similar backgrounds to those at CSU are typically expected to earn $65,137 at their career midpoint, while the median salary of CSU graduates at career midpoint was $75,600. The methodology draws on national data related to demographics, job placement, salaries and loan repayment rates.

In a press release on the report, Brookings Fellow and report co-author Jonathan Rothwell said, "Colleges serve very diverse populations. The advantage of measuring value-added is that it adjusts a school’s rankings based on the type of college and the characteristics of its student body.”