The construction of Cleveland State University’s new health sciences building at the site across from the Student Center will necessitate closing parts of Euclid Avenue and sidewalks to install underground utilities, in two phases.

During the first phase, the westbound vehicle lanes and bus-only lanes of Euclid Avenue and a portion of the north sidewalk between East 21st Street and East 22nd Street will be closed starting Tuesday, March 18. One lane of Euclid will remain open for eastbound vehicles, including RTA buses and trolleys.

The road and sidewalk closures will affect vehicular traffic as well as pedestrian traffic. Please allow additional time to reach CSU buildings within the vicinity, including the Student Center and Main Classroom Building.

For the safety of CSU students, faculty and staff as well as campus visitors, fences will surround the entire work zone. PLEASE ADHERE TO ALL POSTED SIGNS AND WARNINGS. 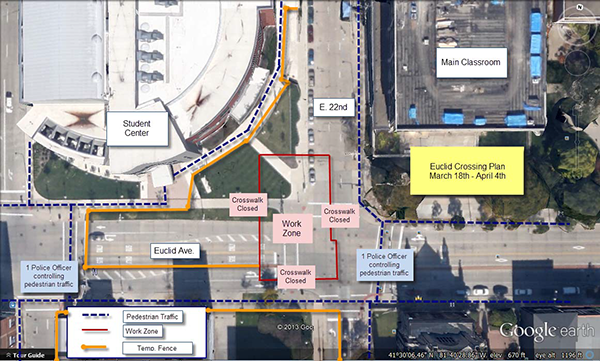 Within the construction area, keep the following in mind:

The first phase is expected to be completed by Friday, April 4.

The next phase of the project, scheduled for April 7-18, will close the eastbound vehicle lanes of Euclid Avenue and the south sidewalk between East 21st Street and East 22nd Street. Further information on this phase will be forthcoming.