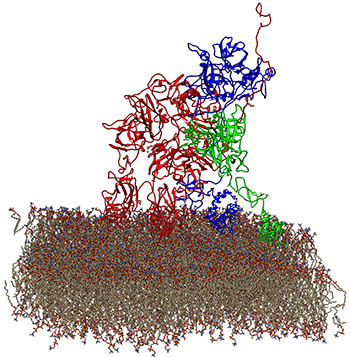 Prothrombinase is a three-protein complex that catalyzes the conversion of prothrombin to thrombin, which is a critical step in the sequence of blood clotting called the coagulation cascade. Researchers have developed significant theoretical evidence of how prothrombinase binds to cellular membranes and jumpstarts the catalysis process that generates thrombin. However, the computing power has previously not existed to actually model the reaction and test how different variables may impact the process.

Thanks to a grant from the Ohio Supercomputing Center, a research team from Cleveland State University is developing the first full scale model of prothrombinase catalysis which will provide new insights on how blood clotting actually works in the body. Including water molecules and counter-ions, the entire model consists of approximately 1.3 million atoms.

“Even as late as a year ago, the computing power to analyze this large of a model did not exist,” notes Will Martin, a doctoral student in chemistry at CSU who is leading the project. “We are really operating at the cutting edge of biochemistry and will be able to provide new knowledge that could improve drug development and treatments for numerous diseases.”

Martin is working with David W. Ball, chair of the Department of Chemistry at CSU, and Michael Kalafatis, professor of chemistry and a member of CSU’s Center for Gene Regulation in Health and Disease. He is utilizing experimental data generated by Kalafatis on how prothrombinase binding causes the catalysis that leads to the creation of thrombin. Errors in this process, either producing too much or too little thrombin, are factors in a host of blood diseases and disorders. Martin will also test the impact of different gene mutations on the process to see how different variables impact catalysis and the clotting process as a whole.

“By being able to model the system as it actually occurs, we can test and improve our theoretical analysis and better assess potential treatments designed to increase or decrease thrombin production, based on the needs of a patient,” Ball adds. “This is also a fabulous opportunity for our students to get real world expertise while making a major contribution to chemistry and medicine.”

Established in 1987, the Ohio Supercomputer Center partners with Ohio universities and industries to enhance discovery, education and product development. It provides researchers with high performance computing, advanced cyberinfrastructure, and computational science education services. The CSU team received a grant of 150,000 units, the equivalent of 150,000 hours of supercomputing time, for the project. It is the largest OSC award ever received by the University.