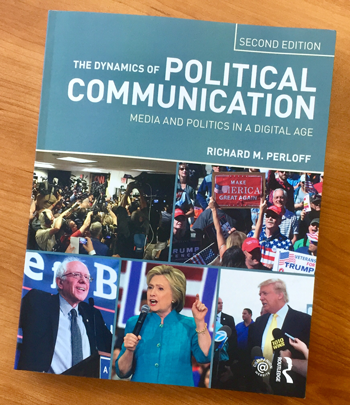 President Donald Trump’s aggressive, grandiose and often effective use of social media during the 2016 presidential election and the first year of his presidency has been hailed by many as a revolution in political communication. However, the strategy Trump used is the culmination of close to two decades of seismic changes in how politicians communicate with, inform and persuade the public. From the rise of the personal computer, to the Internet to the ubiquitous nature of Facebook, Twitter and YouTube, the manner in which politics is used and consumed has become more personal, more instantaneous and in many cases less verifiable.

The Dynamics of Political Communication: Media and Politics in the Digital Age (second edition) seeks to assess how the digital age has changed political communication and the impact this has had on voter attitudes and good governance. The book, written by Richard M. Perloff, professor of communication, political science, and psychology at Cleveland State University, utilizes the 2016 presidential election to illustrate the positive and negative aspects of campaigning via Twitter, and how Donald Trump utilized social media to enhance his straight talk, man of the people image.

“Numerous studies show that despite the multitude of communications avenues now available, voters feel less connected to politicians and less informed about government than previous generations,” notes Perloff. “Donald Trump used social media to tap into this anger and bypass other communications channels to directly and authentically communicate with voters in a way many other politicians had failed to do.”

Perloff provides a comprehensive history of political communications, the effect media has on campaigns and elections and how digital technologies have both enhanced access to information about politics while at the same time increasing confusion between what actually happened and “alternative facts.” He also illustrates the specific power social media has in persuasion and how Trump’s victory highlights new avenues for using social media that could both increase connectivity and reduce factual understanding.

“If people stop watching the news or reading a paper and just follow a specific politician’s Twitter feed, how does that affect public understanding of the important issues facing society?” Perloff asks.

Through the work, Perloff ultimately hopes to provide a better understanding of the importance of political communication to the democratic process, particularly in todays high-octane, often mean-spirited political scene.

The Dynamics of Political Communication is published by Routledge Press and builds on the first edition of the book which Perloff completed in 2014.