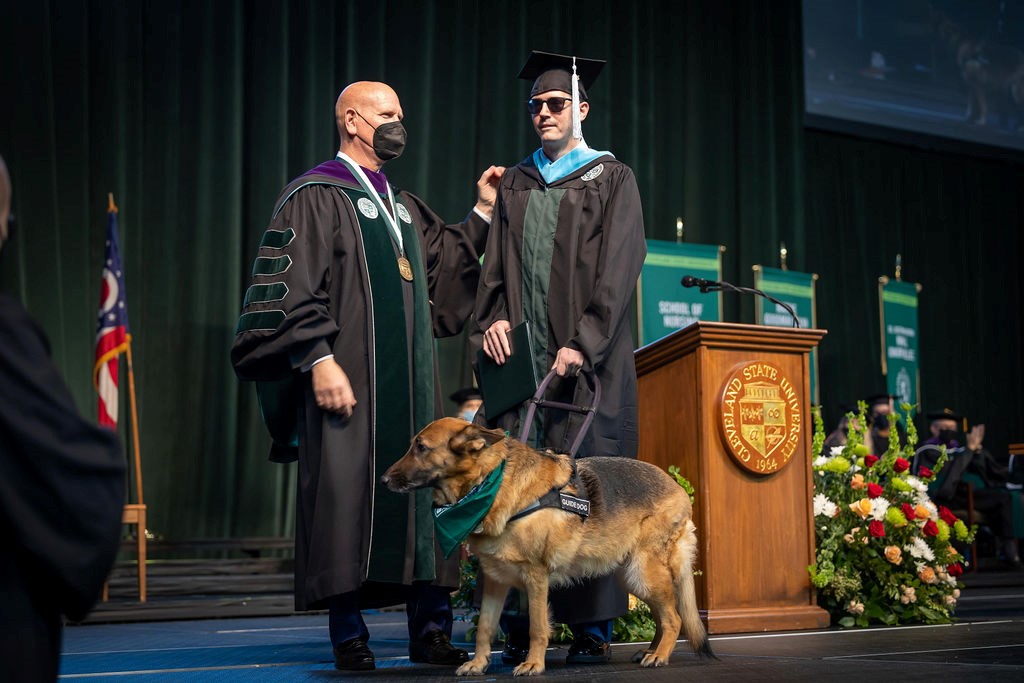 Francis Zunt’s professors will tell you that he is a remarkable student and an equally remarkable person. He has a law degree and is a practicing defense attorney lawyer with, as he says, “quite a bit of expertise” in dealing with felony and misdemeanor drug cases.

Zunt said that it’s one of the few areas of the law where the impact of his work could be felt—helping offenders go from addicts to clean, fully functioning members of society. His court experiences led him to wanting to make a bigger impact on society earlier on in people’s lives.

To that end, Zunt is graduating with a master’s in Early Childhood Education and upon conference, will be a licensed Pre-K-3 grade teacher. He is currently student teaching a kindergarten class in the Parma School District and influencing young people in innumerable ways.

Zunt is visually impaired and Athena, his service dog, has been by his side for the last seven years. Through field work, student teaching, on the bus, in the Uber, walking to class, and every other point in between, Athena has played an active role in his continuing education.

Zunt has laughed with his classes many times that Athena also deserves a diploma, as she has attended all the classes and has even done her own brand of “student teaching.” When his hand is on Athena’s harness, she is working and is not to be touched, but when Athena is not working, she loves to be pet.

His wife Becky has been incredibly supportive in helping Zunt by coming to class each week—which was particularly important when he needed to join class via Zoom and use a screen reader at home. She would sit in class and take notes and move the phone or computer around so her husband could still fully participate in the class.

Many challenges were overcome and completed on Zunt’s journey through the edTPA capstone project, in large part because it’s not efficiently set up for the visually impaired. He said that taking the Bar was easier than what was required for the edTPA. Today and every day, Zunt is a teacher and a model of strength and perseverance to his once and future students. 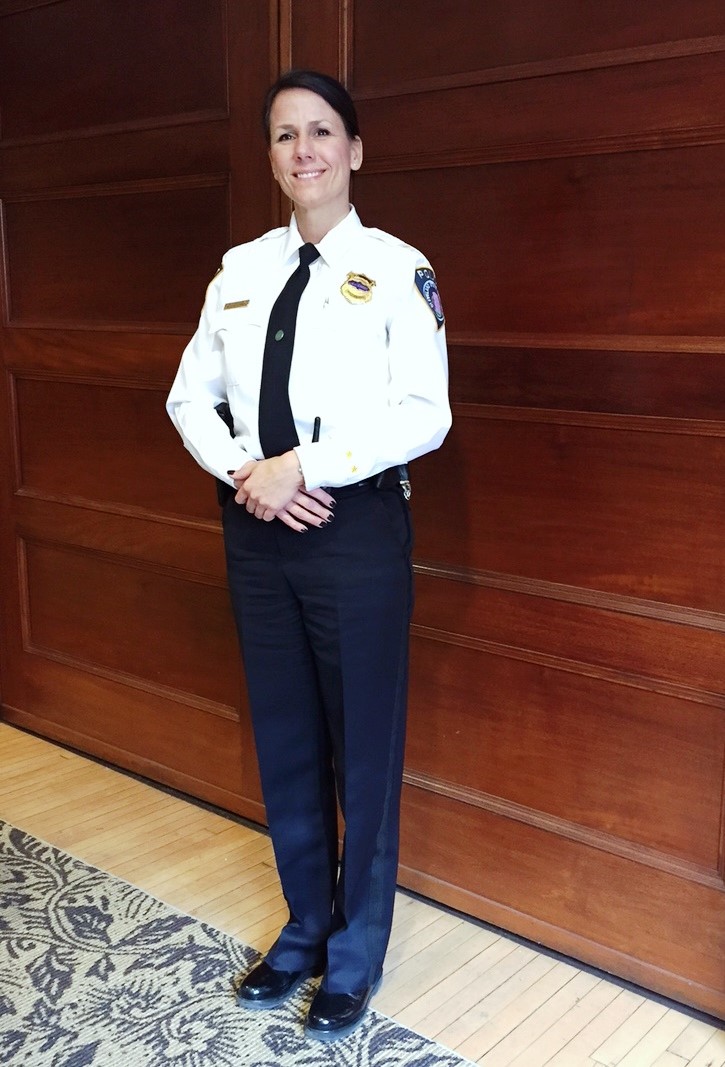 Captain Beverly Jo Pettrey joined the CSU Police Department as an officer in January 2006 and has worked diligently on many crime prevention initiatives and safety programs and services that are offered on campus today. Promoted to lieutenant in November 2014, she was the university’s second woman in the role in its history.

Today as a captain, Pettrey remains a fixture on campus and an inspiration for all those who know her.

“Students should keep in mind that earning their degree is an accomplishment in itself, but also that education is something that no one can ever take away from you,” said then-Lieutenant Pettrey in 2015 upon completion of her undergrad program at CSU.

It took her almost nine years to complete her bachelor’s degree, but she did so in 2015 with honors. Pettrey is walking again this month, having completed her graduate degree. To hear Pettrey tell it, dedication and persistence is the key.

“Stick with it no matter how complicated your life gets. I had to skip a semester, here and there, to attend to family matters [for my undergraduate degree] and I always made it my goal to return the next semester. Like many of our students, I juggled so many things between work, family and school.

“Completion of a degree is even more rewarding when you stop and think about all that you had to juggle to reach that accomplishment,” she said. 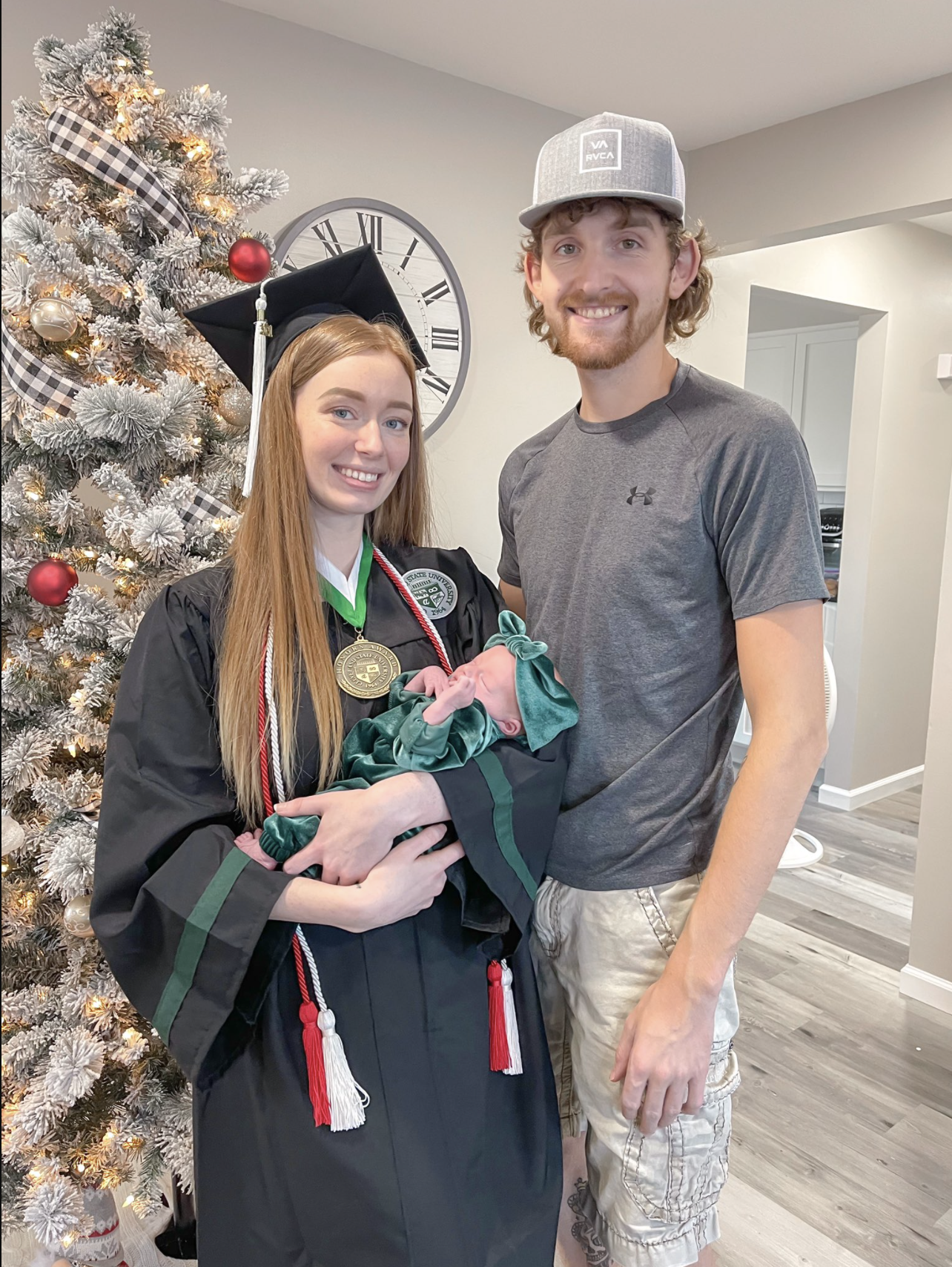 “Life is what happens when you're busy making other plans.” That famous quote has been credited to everyone from Allen Saunders and Quin Ryan, to Henry Cooke and John Lennon.

Today, we can attribute the line to CSU graduate Megann Rosecrans, who would have been with everyone at the Fall 2021 Commencement were it not for the arrival of her first child, daughter Haiden Louise, born on December 5. Talk about timing!

While feeling “very down” about missing graduation, her bundle of joy and so much of everything else in life has Rosecrans looking up. She is planning her wedding, relocated to the Columbus area, and has her eye trained on future opportunities in public relations and crisis management in our state capital.

“I have dreamt of graduating from college for as long as I can remember, making it one of my top priorities from a very young age,” Rosecrans said. “I was eagerly awaiting Commencement for some time, but this was all just a matter of tough timing.”

Rosecrans originally came to CSU wanting to be a film major, but quickly determined from talking to friends in the field that communication was more in line with her interests.

A “lifestyle & college blogger and freelance designer,” she started blogging she was 12 years old and finds inspiration in writing motherhood, relationships, faith, fashion, health and wellness.

During her time on campus, Rosecrans served as a Youth Development Professional for the Boys & Girls Club of Lorain County, as online content editor for CSU’s Vindicator magazine, and was a regular inhabitant of the Dean’s List.

Like many other students attending CSU, she said some early “slip-ups” in community college trying to navigate the school-life balance led her to our campus. But once she arrived, everything fell into place.

“From the very beginning, Cleveland State University felt welcoming, comfortable, safe and familiar. I felt connections with everyone,” she added.

“The whole experience was wonderful. Students and staff were all smiling faces right away—always helpful, accommodating and understanding throughout all four years. I honestly could not have found that at another university,” Rosecrans said.

John Lennon is also attributed to the line, “There’s nowhere you can be that isn't where you’re meant to be.” To that end, will Rosecrans wish to walk in Spring 2022? “We shall see,” she said.