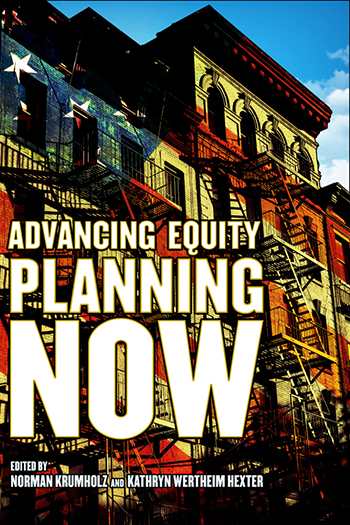 Numerous studies have shown that economic inequality in America is increasing. There are many causes for this, but some of the key factors include the large number of decaying urban neighborhoods and growing concentration of poverty facing many regions of the country. Urban and regional planners often have it within their power to address these issues and serve as advocates for greater equity. The question is: how can “equity planning” be better utilized by local, state and federal government leaders as a tool to accomplish our community and economic development goals?

Norman Krumholz, professor emeritus of urban studies at Cleveland State University, and Kathryn Wertheim Hexter, retired director of CSU’s Center for Community Planning and Development, seek to answer this question in the new book, Advancing Equity Planning Now, published by Cornell University Press. By drawing on the perspectives of diverse planning experts, editors Krumholz and Wertheim Hexter place equity in the epicenter of the planning profession, hoping to provide resources to economic development organizations, elected officials and government agencies that will help restore equity to planning.

To celebrate the book’s publication, CSU’s Maxine Goodman Levin College of Urban Affairs will host the forum “Advancing Equity Planning: What’s Next for Cleveland?” on Thursday, March 28. The event will be moderated by Krumholz and Wertheim Hexter and feature a panel of community experts who will discuss challenges and best practices in equity planning. The forum, which will be followed by a book signing, will be held in the Roberta Steinbacher Atrium in the Levin College at 4 p.m. and is free and open to the public.

The panel will feature Pat Costigan, former senior advisor to the Secretary of Housing and Urban Development during the Obama Administration, Jeffrey Patterson, executive director of the Cuyahoga Metropolitan Housing Authority, Tania Menesse, director of community development for the city of Cleveland, and Mark McDermott, vice president and Ohio market leader for Enterprise Community Partners.

The research conducted for the book was funded by a grant from the Cleveland Foundation.

Norman Krumholz is a leading figure in modern city planning and is considered the “Father of Equity Planning.” He served as planning director for the city of Cleveland from 1969-79, during which he developed and implemented one of the first equity planning strategies in the nation. He has also served as the president of the American Planning Association and the American Institute of Certified Planners. He received the APA Award for Distinguished Leadership in 1990 and was awarded the Prize of Rome in 1987 by the American Academy in Rome.

Prior to retiring in 2017, Kathryn Wertheim Hexter directed CSU’s Center for Community Planning and Development where she provided research support and analysis to numerous local governments and non-profit agencies. A planner and public policy analyst, her work focused on program development and evaluation in the areas of affordable housing policy, community and neighborhood development, sustainable development, city and regional planning and civic engagement. Her community activities include serving on the board of CHN Housing Partners, as a member of the Shaker Heights Landmarks Commission and as a past president and life trustee of Starting Point.