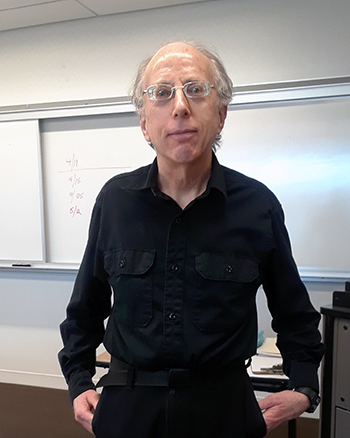 About 10 years ago, Dr. Brian Harper received a call from his wife that their five-year-old son had been diagnosed with Autism Spectrum Disorder. “Even though I was fairly knowledgeable about developmental psychology and the options available to me, this news hit me very hard,” says Harper, an associated professor of education in Cleveland State University’s Department of Curriculum and Foundations (C&F).

His first stop was to the office of Dr. Jeremy Genovese a fellow associate professor in C&F. “I vented about my son and my concerns for his treatment and future. He patiently listened to me and offered counsel as a colleague and as a friend. I will never forget what he did for me that day,” Harper adds.

This story mirrors numerous other examples of Genovese’s kindness and collegiality to students and faculty alike over his nearly two decades of service to CSU. This, along with his excellence as an educator and a scholar, will be sorely missed by all due to Genovese’s recent decision to retire to spend more time with his family and focus on other pursuits.

This next stage of his life will be an exciting transition for the 65-year-old. He’ll trade in his school “uniform” – a navy blue shirt and dark slacks – for yoga pants and a T-shirt, and exchange his syllabi for a passport. He plans to travel, write books and practice his beloved yoga even more than he does now. Genovese also will be tutoring high school students.

Teaching is in Genovese’s DNA. His father taught economics at Antioch College in Yellow Springs, Ohio, where Genovese was born. The family later moved to the Boston suburb of Wellesley when he was two years old. There, his father taught at Babson College and his mother was a homemaker.

Before becoming a full-time faculty member at CSU in 2002, Genovese could be found in classrooms at Kent State University, Cuyahoga Community College, as well as Cleveland State teaching anatomy, physiology, biology or educational psychology. The study of nature versus nurture as it relates to human behavior, is what attracted him to teaching the latter discipline, and numerous CSU education students have benefitted from his expertise in the area.

“That has always been my biggest interest,” he explains.

He also teaches in the Doctorate in Urban Education program. The last course he taught for doctoral students was in the fall 2018 semester -- The Life Cycle: Development and Learning.

“This is a great place to work. I have lots of gratitude toward my colleagues,” he adds. Currently there are 13 faculty, two staff members and three student workers in the Department not to mention dozens of faculty in the College of Education and Human Services whom he interacts with regularly.

“Dr. Genovese was and is an excellent professor and an asset to the Department, but to me, his greatest contribution will always be his willingness to help others,” Harper says.

And Genovese appreciates how important their jobs are in sending qualified teachers into classrooms. “You’re engaged in a practice that makes a difference in the real world,” he said. What he won’t miss: “You get tired of attending meetings.”

However, Liu points out his advocacy for faculty governance, noting, “He has an exceptional memory of meeting activities.” This academic year Genovese represented the Department on the University’s Faculty Senate and served as the president of CSU’s faculty union – the American Association of University Professors. He also served on the university’s Academic Dishonesty Committee.

Genovese has been married to Dr. Teresa Kammerman, a pediatrician, since 1981. They have two adult children. In addition to his long-time devotion to his family and education, Genovese also is committed to being a vegan. He eliminated meat from his diet 28 years ago and stopped using animal products such as eggs, cheese and leather about 13 years ago, as evidenced by his rubber-bottom shoes with canvas tops. Whenever it was his turn to provide lunch for department meetings, he brought delicious vegan dishes such as tofu “chicken” and lentil soup. Genovese became a vegan for ethical reasons.

“When we eat meat we’re essentially making the statement that I’m condoning violence against animals for some small pleasure it provides me,” he said. He does not miss eating hamburgers or sugary snacks from the vending machine. “It’s possible to have an interesting plant-based diet,” he notes.

During the course of 20-plus years of teaching, Genovese developed a philosophy for what it takes to be a good teacher. “The ability to convey your curiosity and enthusiasm about your subject to your students,” he adds with confidence.  It has been said that a teacher has to be part parent, part nurse, part social worker, but who knew that being part salesperson was involved.

“A big component of teaching is persuasion,” according to Genovese. “You’re trying to persuade your students that what you’re doing is the most fascinating thing in the world. In return, the job of a student is to figure out what makes this fascinating to the professor.”