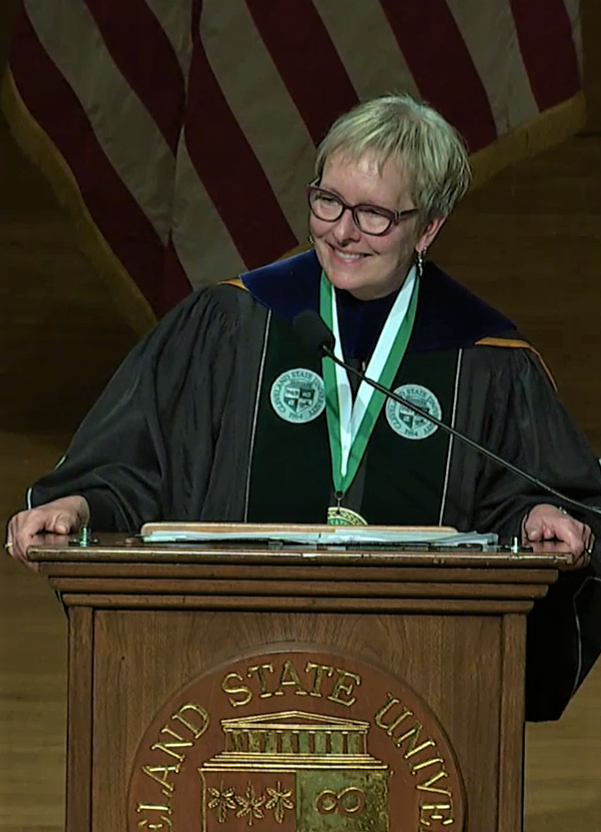 University will advance essential work with “an ignited passion” under her leadership; calls CSU “an economic, urban development, and civic engagement engine” for city, region, state.

The day’s events began with an Investiture Ceremony, a longstanding academic tradition which formalized Dr. Bloomberg’s April 26 appointment as president of the university. She previously served as provost and senior vice president for academic affairs at CSU beginning in September 2021.

Mayor Bibb, who addressed the crowd first, praised Dr. Bloomberg’s “genuine passion for her work” and called her “a tireless advocate” who operates with social justice and inclusion always at top of mind.

Anup Kumar, Ph.D., president of the CSU Faculty Senate, offered the audience a thoughtful glimpse into the new president’s strengths as “an empathetic leader and listener,” a leader who he described as “well-positioned” to help CSU “carve a new path of comprehensive growth.”

He eluded to what CSU senior and student trustee Brittany Sommers later underscored in her remarks: that Dr. Bloomberg is an “aspirational leader,” and “the right leader at the right time” for the university.

For her part, Dr. Bloomberg was steadfast in offering her “city is our campus” mindset and offered a glimpse of how that impacts her vision for CSU during her address: “CSU is excellent in large part because we are inclusive of students who aspire, aim high, and work doggedly to achieve their academic, professional, and personal dreams,” Dr. Bloomberg said. 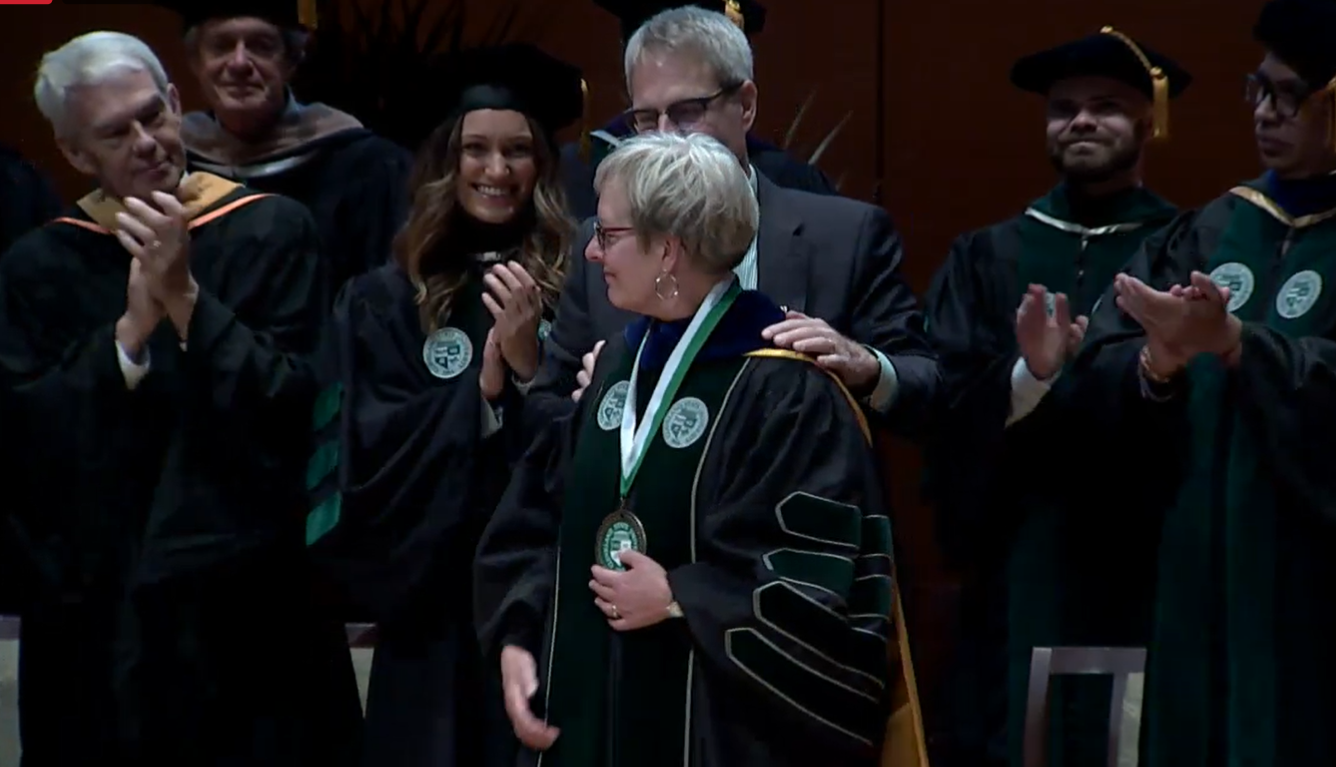 “Often, our students are the first person in their family to attain a baccalaureate or graduate degree,” she added, and do so in the face of many challenges and obstacles. “They look beyond their current circumstances toward their aspirations.”

Dr. Bloomberg then pointed to CSU’s role as an anchor institution for the city, region and state—particularly Ohio’s post-secondary employment data, which shows that 91 percent of CSU graduates stay and work in the state one year after graduation and that a decade after graduation later, that number stands at 78 percent.

“CSU is producing a greater percentage of graduates who stay and contribute to the Ohio workforce than any other Ohio public university,” Dr. Bloomberg said, adding that “CSU is an economic, urban development, and civic engagement engine” for our region. 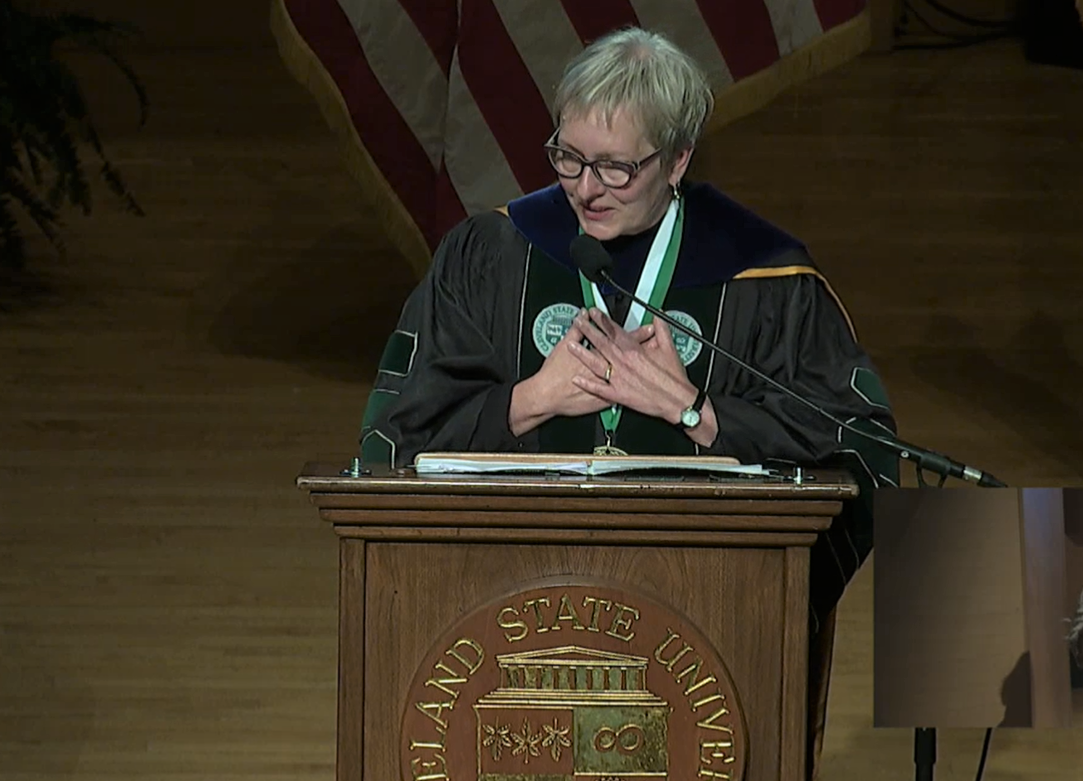 Dr. Bloomberg incorporated themes of empathy, ingenuity and interdisciplinary partnership into her address, observing that these traits also present the means of achieving “emotional, developmental, economic, physical, environmental, social, and spiritual wellbeing” for CSU and the region as a whole.

“We will advance our essential work with an ignited passion for the wellbeing of the people and the communities we serve,” Dr. Bloomberg said, reinforcing CSU’s position as a shining beacon and anchor institution.

CSU’s pursuit of learning and creation of new knowledge “benefits our collective wellbeing on our campus, in our beautiful city full of strong partners and allies,” she added, noting the “remarkable economic, civic and natural resources” within and surrounding CSU’s campus. “I am so proud to say: We are Cleveland State University,” Dr. Bloomberg concluded.

Prior to CSU, Dr. Bloomberg served eight years as dean and was previously associate dean of the Humphrey School of Public Affairs at the University of Minnesota. In that capacity, Dr. Bloomberg led the global expansion of the school, established a national pathway program for college students underrepresented in public policymaking, launched an internationally focused Human Rights degree, and developed the Mandela Washington Fellowship program to support young leaders from countries across Africa.

Her biography and archive video of the Investiture livestream can be found on the CSU Inauguration page.