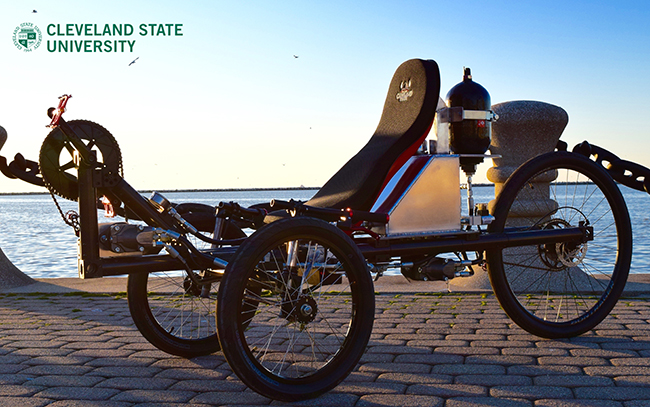 A team of students from Cleveland State University’s Washkewicz College of Engineering placed first in the 2020 Fluid Power Vehicle Competition presented by the National Fluid Power Association. The team, led by Ellen Rea, along with team members Jake Landry, Angela Rodriguez, Sarah Smith, and Naik Yusufi, won for their design of a fluid-powered bicycle. The team was advised by assistant professor Bogdan Kozul.

Design and construction of the fluid-powered bicycle started in the fall of 2020. The team decided to start with a new design, in contrast to the prior year’s vehicle, for which another CSU team had won first place in the 2019 competition.

The new design included a custom carbon fiber frame, integrated hydraulic reservoir and a new hydraulic circuit featuring intuitive rider controls and regenerative braking. It was a dramatic change from the prior year’s vehicle.

“We were able to integrate many component mounts into the hydraulic reservoir, so we didn’t require a bunch of separate brackets,” explained Rea, who is also a spring class of 2020 university valedictorian. “Through doing that, we got rid of some weight and also made everything more streamlined.”

As for future plans for the vehicle, that decision is up to next year’s design team. The bicycle will be used as a learning piece for the future team, but will also to be taken to trade shows. Sponsoring companies have also used the bicycle to demonstrate their support for colleges and universities.

“This was an outstanding group of kids to work with and I enjoyed every minute of it. Every student had a unique characteristic, that when put together, they could hit a home run on any project,” said Kozul.

Watch the vehicle in action here.