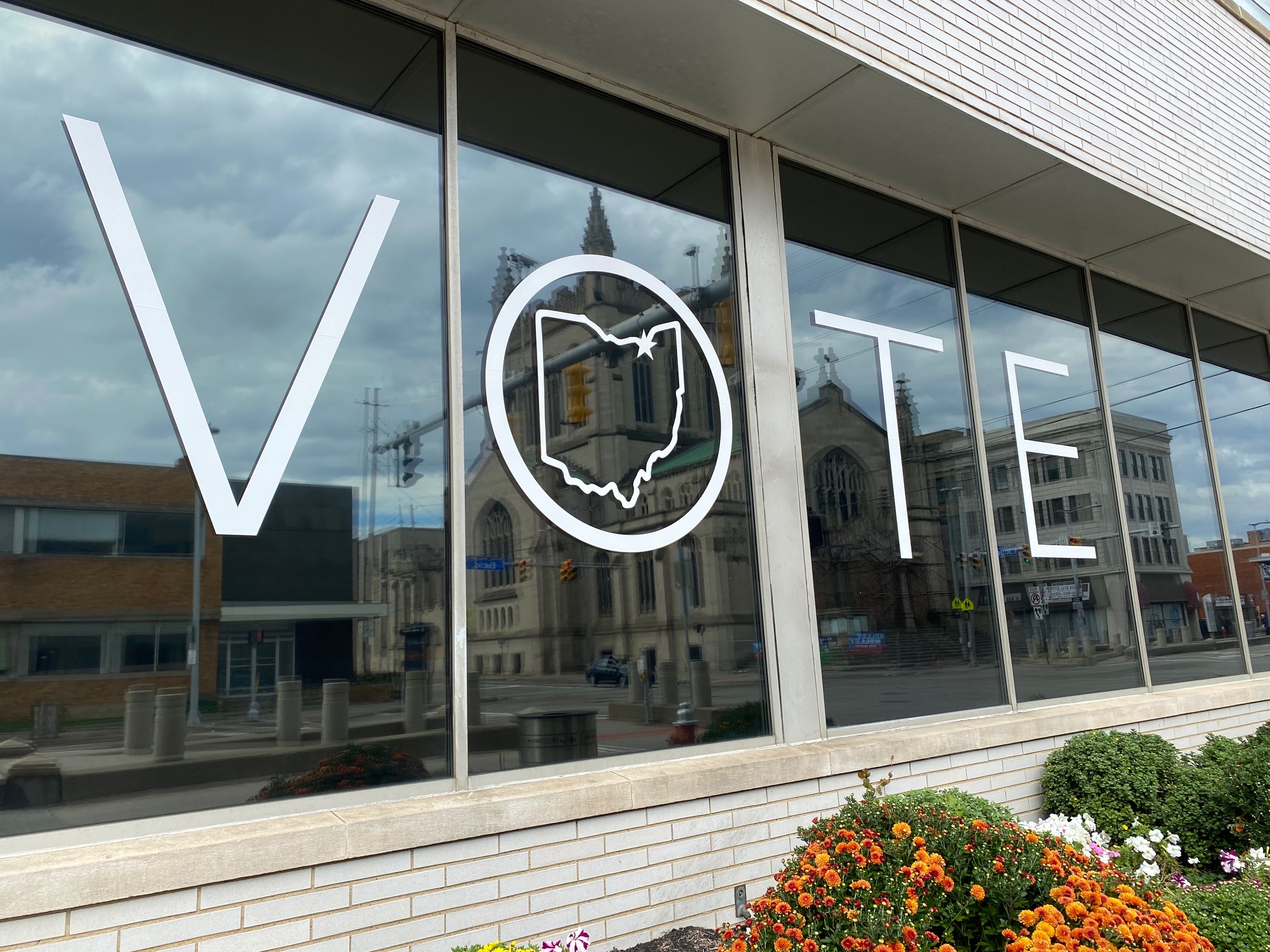 Research indicates that voter turnout and civic engagement is often attached to socioeconomic status, education and “reading the tea leaves” of American psephology – the complex menagerie of public opinion, polling data and prevailing winds of media coverage and exposure.

But it’s also attached to something much more primal and meaningful, especially in places like college and university campuses: interpersonal communication. Often, the simple act of asking, “Are you going to vote on election day?” is enough to alter or modify a potential voter’s behavior.

Anita Ruf-Young, Office of Civic Engagement (OCE) director in the Maxine Goodman Levin College of Urban Affairs at Cleveland State University is no stranger to that concept or the data behind it. In fact, it’s like that strong cup of coffee that gets her out of bed in the morning. 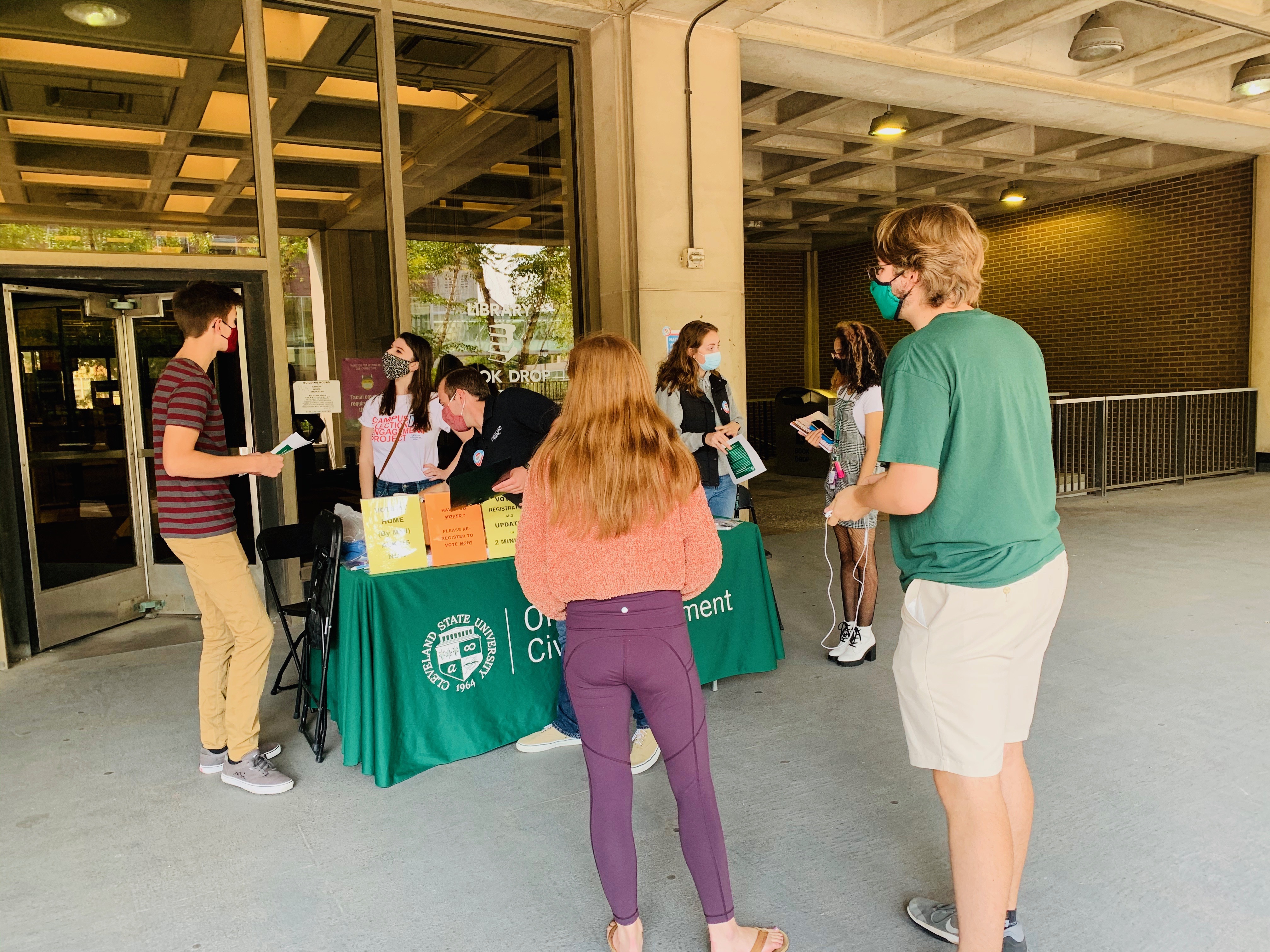 “That is a double-digit increase in four years, nicely above the 39.1% voting rate for all other institutions in the recent National Study of Learning, Voting and Engagement (NSLVE) report,” Ruf-Young said.

What’s more, the voting rate in presidential election year 2016 for CSU students was 64.2%, compared to 50.4% voting rate for all other institutions in the NSLVE report. The message here is that CSU is engaged. 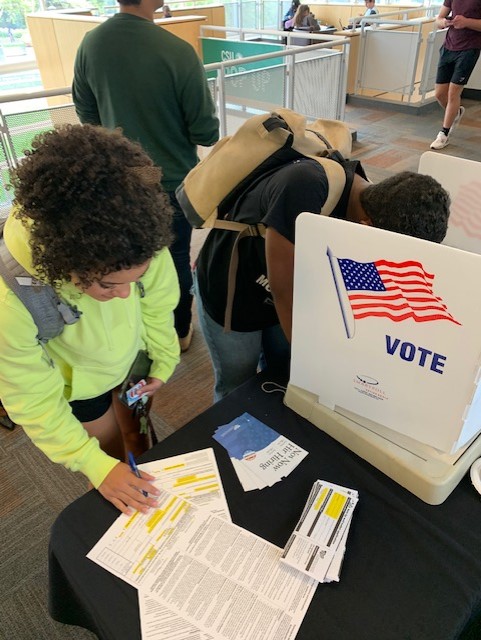 “While these numbers are impressive and something to be pleased with, there is still a long way to go with areas for improvement, especially regarding participation in local elections,” she added.

Ruf-Young points to interpersonal connection with students as a driver of this success.

Between now and Election Day 2021 – November 2 – OCE and partner organizations including Northeast Ohio Voter Advocates plan to have early voting promotion tables around CSU between the east garage and the recreation center; in the Student Center atrium; individual colleges and more.

Hitting as many potential voters before every election is key, “and not just for presidential elections,” Ruf-Young said.

“Voters tend to get charged up about, or reviled by, presidential elections,” she added. “So, there is a lot of turned-on and turned-off attitudes surrounding them. But what’s at stake during all the other elections that come between them is often much more important to our everyday lives, because that effects change on the local level. Our aim is to really reinforce that.” 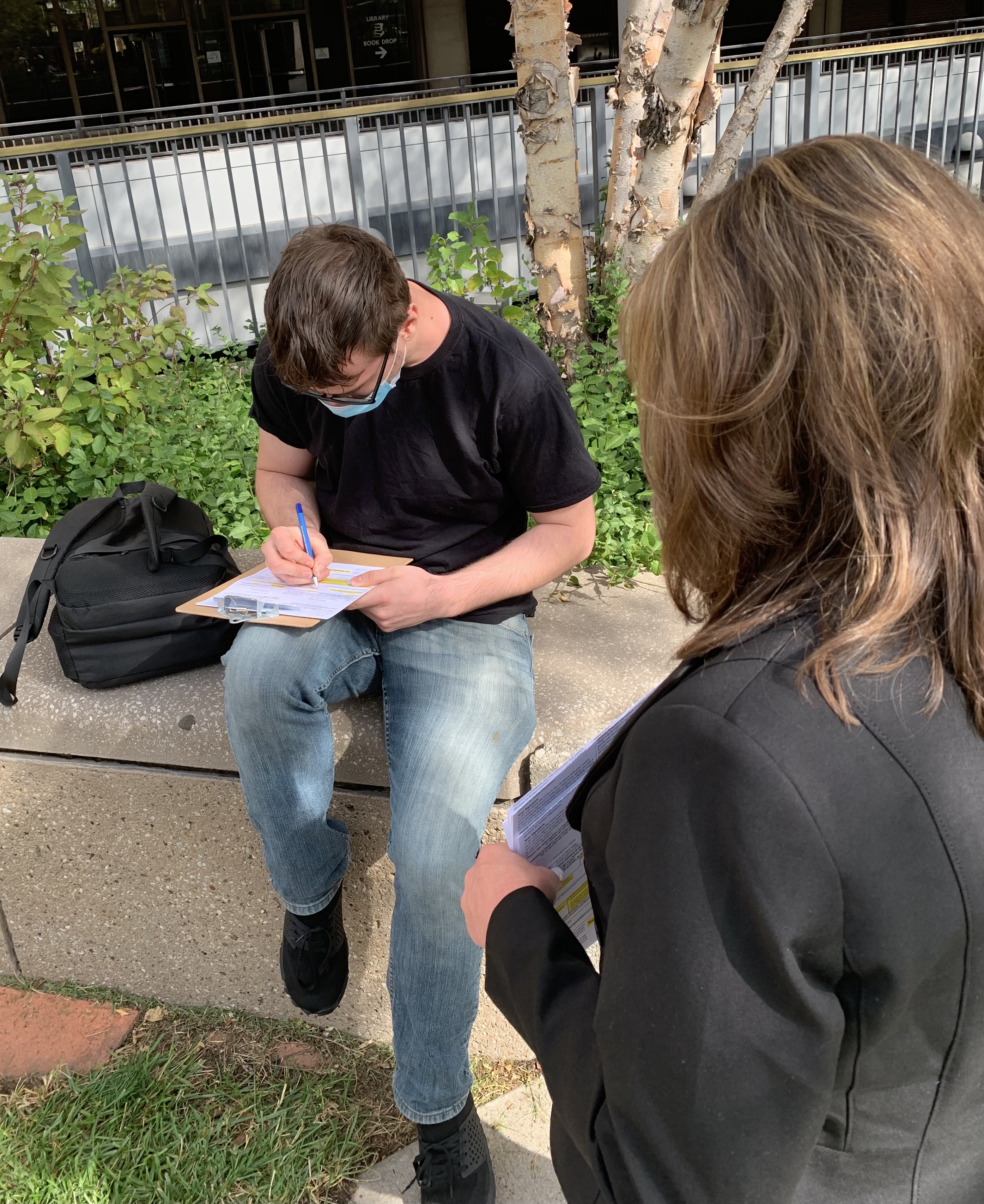 Ruf-Young said that approach is working, and enthusiasm is spreading, citing success stories like student organizations registering en masse and CSU basketball coach Dennis Gates walking his players down Euclid Avenue to the Cuyahoga County Board of Elections to engage the process last year. To Ruf-Young, inspiration is the key.

“I think that it is getting out there that our office is not pushing an agenda,” she added. “We’re nonpartisan, not pushing any candidates or platforms. We want all the questions answered,” she said. “We want all the people involved in the process. We want all students and all voters to get and stay involved, drawing their own conclusions by being informed and getting and staying engaged.”

With Ruf-Young at the helm, CSU’s OCE is committed to teaching students about the importance of voting, providing them with nonpartisan information and opportunities to guide their decision making, understanding of the process, and to literally “rock the vote” with active student involvement in the democratic process.

OCE introduced a new curriculum called Vikes Vote to “Introduction to University Life” (ASC 101) in Fall 2020, targeting “first-year students to create lasting habits” with benefits beyond voting, including volunteering for campaigns and going door-to-door for the most recent census.  These efforts helped CSU land a “Voter Friendly Campus” designation, an initiative led by Fair Elections Center’s Campus Vote Project and Student Affairs Administrators in Higher Education, joining 231 campuses across 37 states and the District of Columbia. 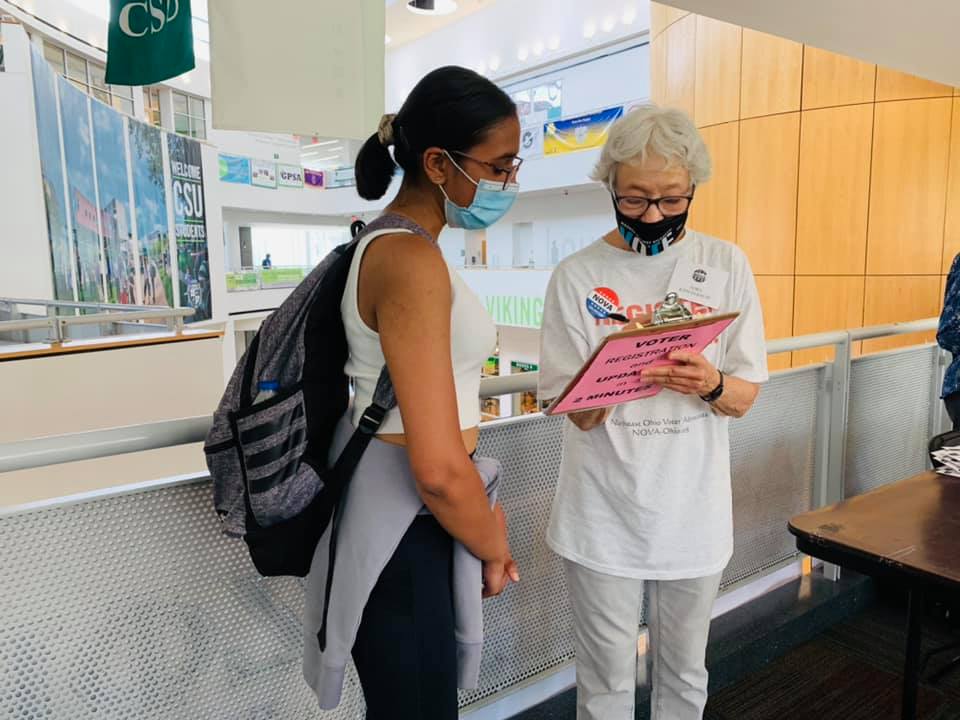 “[Students are] more likely to vote and be politically-active for the rest of their lives with early exposure,” Ruf-Young said. “If you don’t get to them now, they’re much less likely to actually exercise their right to vote later in life. We want them to be active in their communities too, because that impacts us all.”

To that end, the OCE has already registered or updated several hundred CSU students and faculty through voter registration tables – most recently with the National Voter Registration Day drive last month in the Student Center. 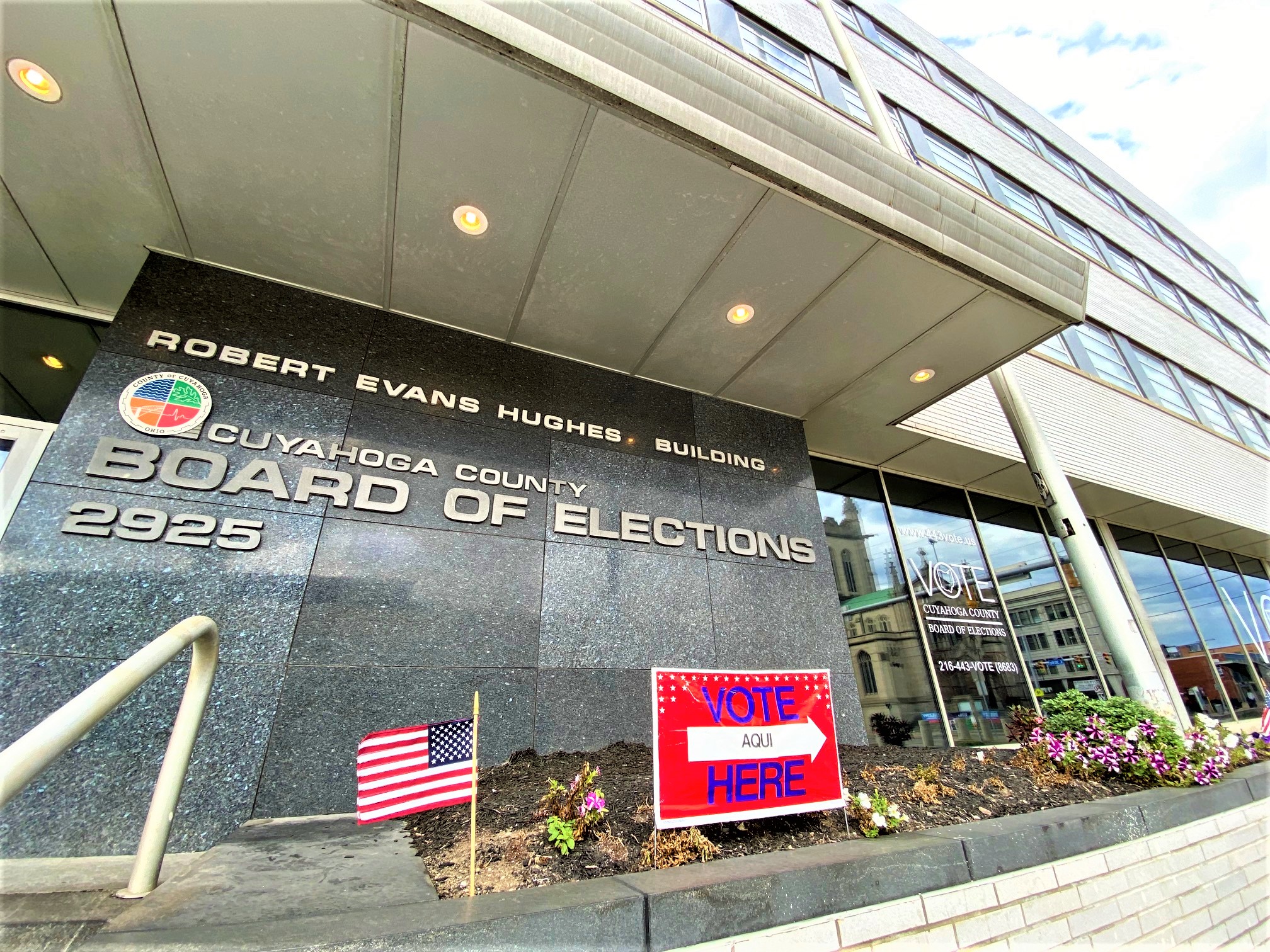 These channels serve as a megaphone for ongoing engagement opportunities. Voter- and civic engagement initiatives do a great deal to reinforce classroom exposure, said Ruf-Young.

See Behind-the-Scenes and Get Paid

This fall, the OCE and partners at the Cuyahoga County Board of Elections are asking 100 CSU Vikings to step up for an Election Night Ballot Box Openers opportunity. This one-night, $15 per hour paid effort aids election officials with unloading vans, transferring ballot boxes to carts for processing and opening/organizing ballot boxes.