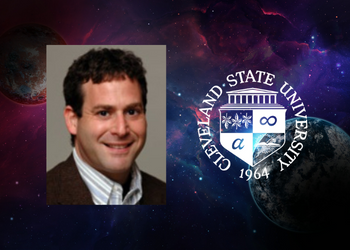 Andrew Resnick, Ph.D., associate professor of physics at Cleveland State University, has witnessed some spectacular views of the Milky Way galaxy during his annual family vacation in North Carolina. Being a bit of a photo enthusiast, he took a myriad of images over the last several years -- some 2500 individual photos in all -- looking for just the right absence of light pollution to capture what he and his family have witnessed.

Recently, one of Dr. Resnick's images has been featured in the latest "Backscatter" highlight page in the publication Physics Today in a feature called "A six-year galactic portrait." To say the results are breathtaking is an understatement.

Dr. Resnick said that "on one or two nights of their vacation every year, the sky gets sufficiently dark and clear for the conditions needed to see the galaxy." He didn't use a motorized telescope mount or other specialized equipment; rather, he "took all the images, using a DSLR camera with a 105 mm lens, a shutter speed of 1 second, and an (-stop of ti2, which allows for the aperture to take in a lot of light, even at night."

The photos were stacked and assembled into a composite image using the Astro Pixel Processor application. Views of the galaxy such as this one are incredibly rare: a publication in 2016 found that the Milky Way is not observable to 80% of North America.