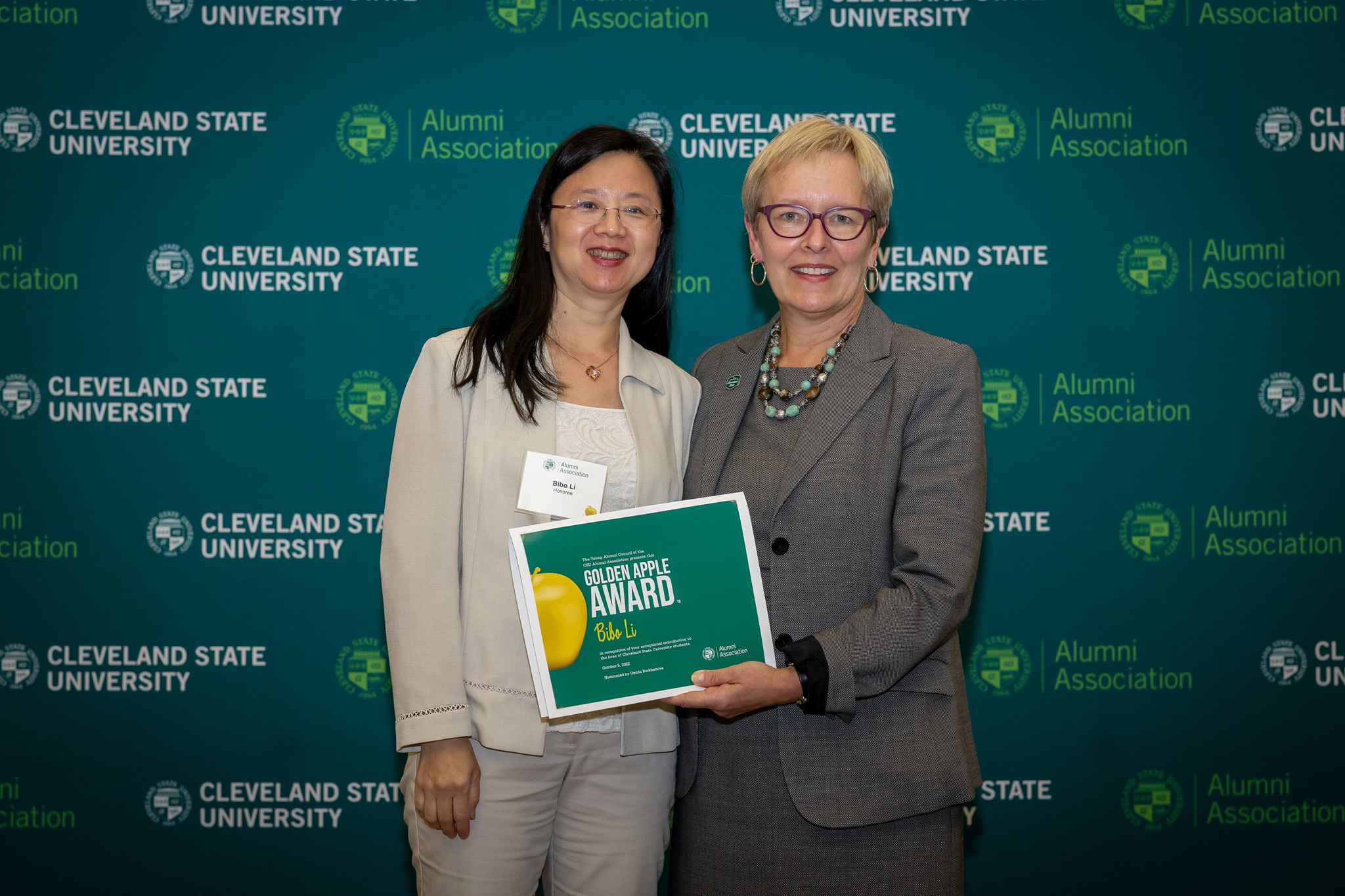 Since her arrival in 2006, Dr. Li has procured nearly $8.5 million in grants, including the single largest NIH R01 grant ever received by CSU

This past summer, professor Bibo Li, Ph.D. in the Department of Biological, Geological, and Environmental Sciences (BGES) and a member of the Center for Gene Regulation in Health and Disease (GRHD) at Cleveland State University, received two new National Institutes of Health (NIH) grants for her research on telomeres— regions of repetitive DNA sequences at the ends of chromosomes.

Together with associated proteins, telomeres act like shoelace tips to protect the chromosome ends from becoming frayed or tangled, as Dr. Li described in a recent interview.

Dr. Li received the two competitive NIH awards in the same year, which is an impressive achievement in itself, but she was also responsible for research grant funding totaling nearly $8.5 million—including the single largest NIH R01 grant ever received by CSU.

Dr. Li received a new, four-year, $1,188,000 R01 award from the National Institute of General Medical Sciences (NIGMS) at NIH this August, which allows her to investigate the essential and unique mechanisms of telomere maintenance in a Kinetoplastid parasite, Trypanosome brucei, that causes fatal sleeping sickness in humans. 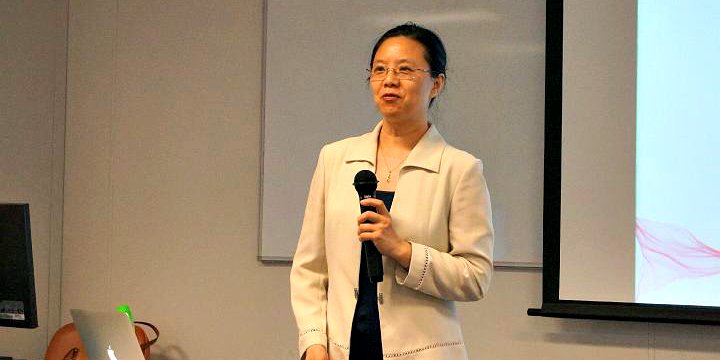 Dr. Li also received a two-year, $419,237 R21 grant from the National Institute of Allergy and Infectious Diseases (NIAID) at NIH, which fortified her ongoing research on how telomere proteins regulate VSG switching in T. brucei, and their work has been published in many high profile scientific journals including Cell, Science Advances, Cell Research, Nucleic Acids Research and more.

Telomeres are also essential for genome integrity and chromosome stability in human cells. When telomeres shorten to a critical length (which happens in many human somatic cells when one grows old), cells will be “too old to proliferate” anymore. In addition, unstable genome due to really short telomeres can lead to tumorigenesis—the production or formation of a tumor or tumors.

Additionally, understanding of essential telomere maintenance mechanisms that exist in the parasites but not in the human host will be invaluable for future development of means to eradicate the Kinetoplastid parasite infections. Furthermore, comparing common and unique telomere maintenance mechanisms in different organisms will help better understand the evolution of telomere proteins and their functions.

Dr. Li received her B.S. in Electrical Engineering from Peking University in Beijing, P. R. China and her Ph.D. in Molecular Biology from Weill Medical College of Cornell University in NYC. She received her postdoc training with Dr. Titia de Lange at the Rockefeller University and, subsequently, was a research assistant professor at Dr. George Cross’ lab from 2002 to 2006 before she joined CSU. 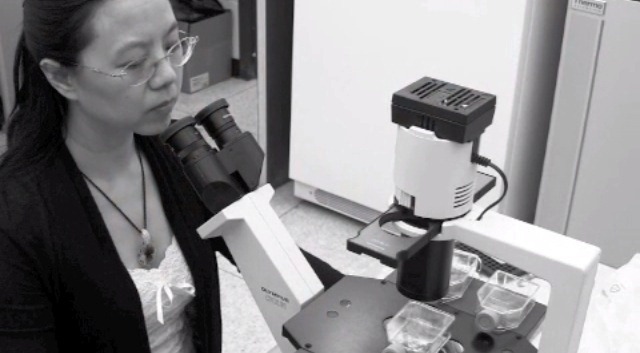 She is incredibly pragmatic and matter-of-fact about her successes here at CSU for over 16 years: “This is not the kind of position where I am looking for personal attention from what I do,” said Dr. Li in a recent interview.

“It is the acknowledgement of the work and research that happens in this lab that is most meaningful—along with the impact that our undergraduate and graduate researchers have had in the field. They are doing important work.”

Dr. Li and members of her lab had a distinct honor to have platform presentations at the Kinetoplastid Molecular Cell Biology (KMCB) meeting IX and the annual Molecular Parasitology Meeting (MPM) XXXIII, held on September 13-17 and 18-22, respectively in Woods Hole, Massachusetts. The title of Dr. Li’s talk at the KMCB (IX) was titled “The RNA Recognition Motif (RRM)-mediated RNA binding activity in T. brucei RAP1 is essential for VSG monoallelic expression.”

SK Abdus Sayeed, a Ph.D. student from Dr. Li’s lab, had the honor to give an oral presentation on his research “Investigating TERRA functions in VSG switching and telomere maintenance in Trypanosoma brucei” at the annual MPM XXXIII for which Dr. Li also serves as a co-organizer.

A CSU faculty member since 2006, Dr. Li has been priceless as a researcher and mentor to numerous students and post-docs from her lab—many of whom “have gone on to positions at Harvard, NYU Medical School, the NIH, Stanford, and Memorial Sloan-Kettering Cancer Center,” Dr. Li said.

She added that many of the students who have been through her lab “do a great job of staying in touch” and that their impact has been both “gratifying and far-reaching.” 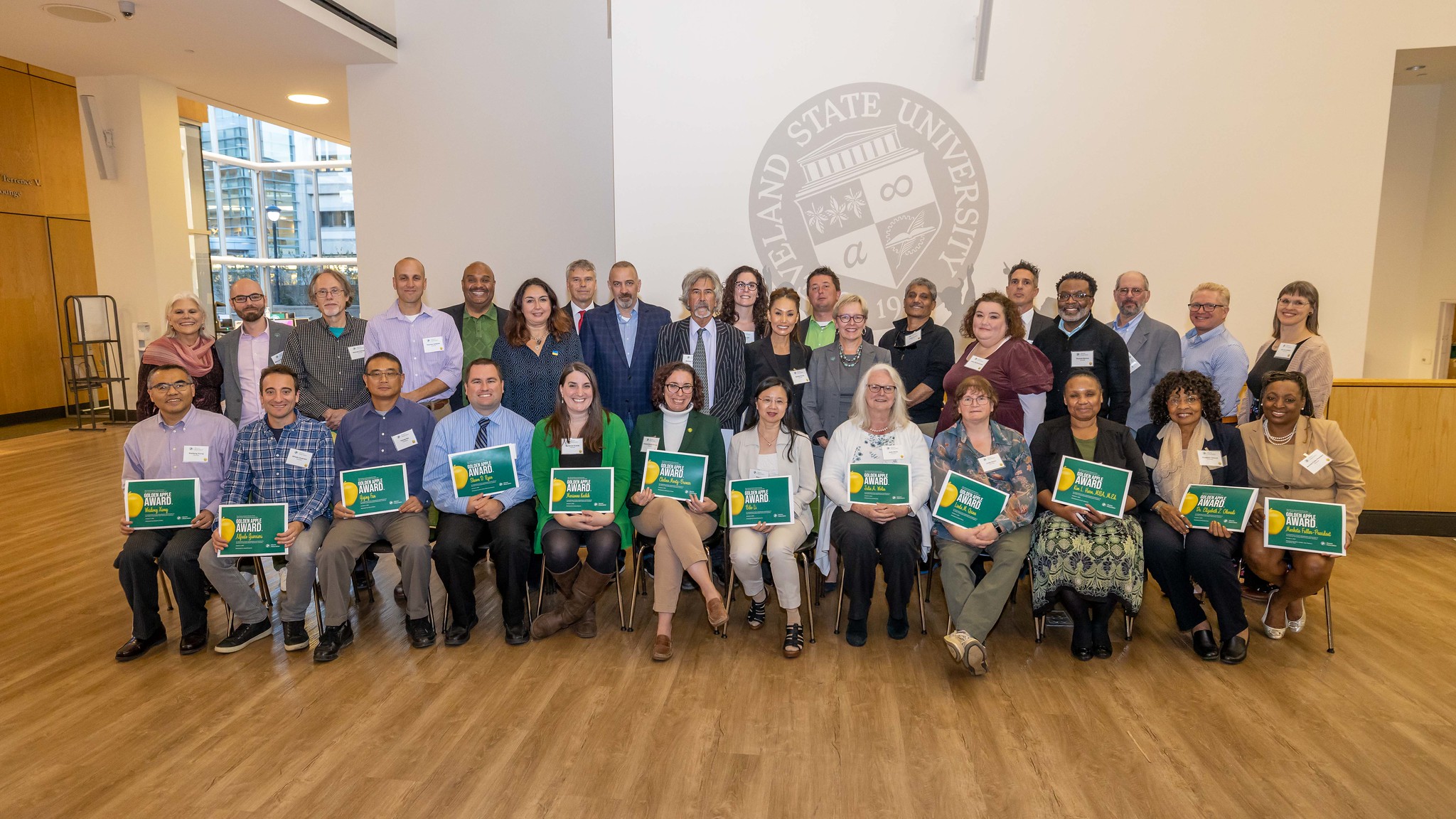 That feeling is a mutual one amongst alumni taken under Dr. Li’s wing; she was honored with a Golden Apple Award by CSU’s Young Alumni Council earlier this month. Since 2014, the annual YAC-sponsored awards recognize outstanding contributions of faculty and staff through recent alumni nominations. Dr. Li (seen here front row, center) and 43 other members of CSU faculty and staff were honored with Golden Apples.

Dr. Li also indicates that there is “a lot of room for growth and expansion” as it relates to “futureproofing” the laboratories at CSU and all the important work happening in them.

“Dr. Li is an outstanding researcher who continues to be highly successful across the many years of her tenure here at CSU,” said Roman V. Kondratov, Ph.D., professor of the Biological, Geological and Environmental Sciences department and associate vice president at CSU.

“Importantly, the federal and other funds that Dr. Li secured have provided unique research opportunities for CSU students to get world-class research experiences as a part of their graduate and undergraduate educations.”