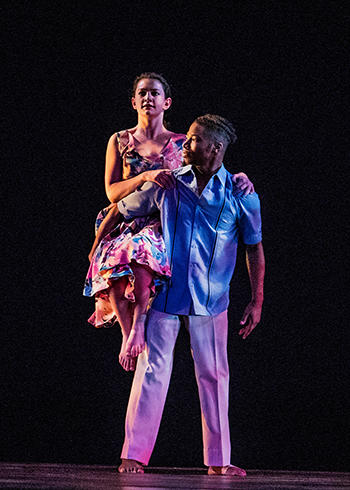 Cleveland State University’s Department of Theatre and Dance, a resident company of Playhouse Square, will present its annual Spring Dance Concert on Friday, March 22 and Saturday, March 23 at 7:30 p.m. at the Allen Theatre, 1407 Euclid Avenue, Cleveland.

All tickets are $5 and may be purchased by phone at 216.241.6000, online at playhousesquare.org or in person ahead of time at the State Theatre Ticket Office, located at 1519 Euclid Avenue, Cleveland. Tickets are also available at the Allen Theatre on the nights of the performances.

The concert features the CSU DANCE COMPANY, FACULTY, ALUMNI, MUSICIANS, GUEST ARTISTS and the new apprentice ensemble VIKING DANCE GROUP. Choreographers include Antonio Brown, formerly of Bill T. Jones/Arnie Zane Company, Tyler Ring of GroundWorks DanceTheater, Bryant Henderson, a visiting assistant professor of dance at CSU and Dr. Habib Iddrisu, a master drummer who is on the faculty at the University of Oregon. This repertory concert consists of both newly created and restaged works that represent varied artistic styles, traditions and music, with special appearances by the six-member AntonioBrownDance Company and Habib Iddrisu.

Antonio Brown’s newest work created for the CSU Dance Company, Our Room ... Only Imagined, takes an affectionate look back to his younger self. As an only child with a vast imagination, Antonio spent much of his time creating elaborate new worlds and inhabiting those worlds with fantastical toy creatures. Supported by an energized sound score created by Brown, this piece will take the viewer on an intimate journey inside one of these magical worlds.

The New York based AntonioBrownDance will perform an ever-evolving work titled Mixtape. Compiled of various short movement and sound studies, this work explores the connections people have to sound and to music, and the consequences that repeated listening experiences can have on their bodies and their movement choices.

Dr. Habib Iddrisu, a traditionally trained dancer, musician and oral historian from Northern Ghana, has returned as guest artist to stage the energetic and exuberant Yankadi/Macru featuring the CSU Dance Company and the Viking Dance Group. Mostly popular along the Guinea Coast of West Africa, Yankadi/Macru is offered as a celebratory music/dance form for a variety of occasions. This version highlights the possibilities and adaptations of traditional styles to proscenium stages across the African Diaspora. Dr. Iddrisu will perform with the dancers and with student musicians from the CSU Campus International High School as part of the CSU Dance Program’s Dance in Community focus.

Tyler Ring's piece, The Depth Between features four senior dance majors performing to a moving piano score by composer Goldmund. The dance focuses on shifting relationships created through explorations in three-dimensional movement and the negative space between the dancers, allowing for new and unexpected interactions.

Bryant Henderson will be premiering two new works. The first piece, US/them, is a collaborative work created and performed with CSU alumna Anne Howard. Henderson and Howard have teamed up with Dr. Bob Roche, assistant lecturer in Music Education at CSU, who will perform an original score to support this work. US/them is inspired by, explores and references the hypocrisy and divisive characteristics experienced within contemporary social and political narratives in our country. Henderson second work, Near the Edge, will be performed by the CSU Dance Company. This contemporary-urban piece considers the human experience of accepting and resisting social relationships and conformity, and how these continuous negotiations impact one’s sense of individuality and control. These experiences are tangibly represented by the dancers’ practical work of re-organizing and manipulating wooden boxes designed by Associate Professor of Theatre Russ Borski.

The evening will begin with a pre-concert Allen Theatre lobby performance of an excerpt of Tammy Metz Starr’s Saffron Days, performed by the Viking Dance Group. This ode to spring weather-which cannot arrive soon enough- features dancers performing simultaneous Butoh-influenced solos. And, as the audience is ushered into their seats, they will be greeted by an additional pre-concert welcome from eightCSU Alumnae, created in collaboration with Lynn Deering.