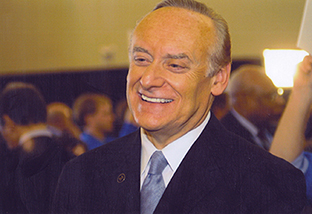 CSU is proud to announce that Dean Lee Fisher of the CSU College of Law has been inducted into the 2022 Cleveland Magazine Business Hall of Fame.

He was inducted “in recognition of his visionary leadership and impact on the Ohio and Cleveland business communities.”

Fisher currently serves as Dean as well as the Joseph C. Hostetler-BakerHostetler Chair in Law at the CSU College of Law.

Fisher’s diverse career has spanned the private, public, nonprofit, and academic sectors. In addition to serving as Dean, he is Senior Fellow, Cleveland State University’s Levin College of Urban Affairs, and Urban Scholar, College of Urban Planning and Public Affairs and the Great Cities Institute, University of Illinois at Chicago. Fisher had previously served as President/CEO of CEOs for Cities, nationwide innovation network for city success, for six years.

In addition to serving as Attorney General, Fisher has served as Ohio Lt. Governor; Director, Ohio Department of Development; Chair, Ohio Third Frontier Commission; State Senator; and State Representative. He also served as President and CEO of the Centers for Families and Children. Fisher is a graduate of Oberlin College and served on the Oberlin College Board of Trustees for 12 years.

Fisher is married to Peggy Zone Fisher, President and CEO of the Diversity Center for Northeast Ohio. They have two children, Jason, an actor in Los Angeles, and Jessica, a 2018 graduate of Cleveland State University.

Cleveland Magazine has been serving Greater Cleveland and Northeast Ohio audiences monthly since its founding and inaugural issue in April 1972. In conjunction with its publisher Great Lakes Publishing, Cleveland Magazine has inducted a venerable “who’s who” of the city’s business stars into their Business Hall of Fame.