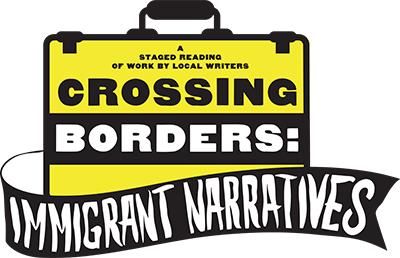 When Literary Cleveland put out a call for immigration stories by Northeast Ohio writers, the group was flooded with responses, highlighting both the tremendous contributions of immigrants to the region and the importance of this voice to our cultural heritage.

Now many of these powerful stories – written by immigrants from Syria, Iran, Colombia, Poland, China, Azerbaijan and elsewhere– will be heard in front of a live audience as part of a staged reading produced with Cleveland State University during the upcoming Cleveland Humanities Festival.

The staged reading of short essays, fiction and poems is directed by Marc Moritz, who has assembled a cast of professional actors to perform the pieces. The stories in the show are provocative, moving, heart-wrenching and funny. The authors address the emotional journey of crossing borders, both literal and metaphorical, and what it means to be both an immigrant and an American.

In “The Buttonhook Men,” Jill Sell writes about her Czech ancestors’ uncertain passage through Ellis Island, which could easily have been rejected. “Food and Family,” a piece by Hathaway Brown student Crystal Zhao, tells the story of a second-generation Chinese immigrant bonding with her mother over stories of childhood rebellion. The poem “Genesis” by Daniel Gray-Kontar addresses the journey of African-Americans from the south to northern cities like Cleveland during the Great Migration.

In the raw “Struggling to Survive,” Syrian immigrant Bayan Aljbawi writes about leaving her troubled homeland for the U.S., an experience she describes as “escaping from one suffering to another: new culture, new country and different language.”

“My husband, my baby and I were lucky,” she concludes. “The only question left is this: What about too many others who did not get a chance to do the same?”

And in “American Promise,” award-winning novelist and Case Western University professor Thrity Umrigar – who immigrated here from India over 30 years ago – confronts the current political climate and asks if the U.S. “will be a country that is as small and narrow as its fears” or “as large and glorious as its dreams, as splendid as the hopes of millions of its citizens, immigrant and native born…?”

The event is free and open to the public but registration is strongly encouraged. For more information, visit http://www.litcleveland.org/special-events.html.