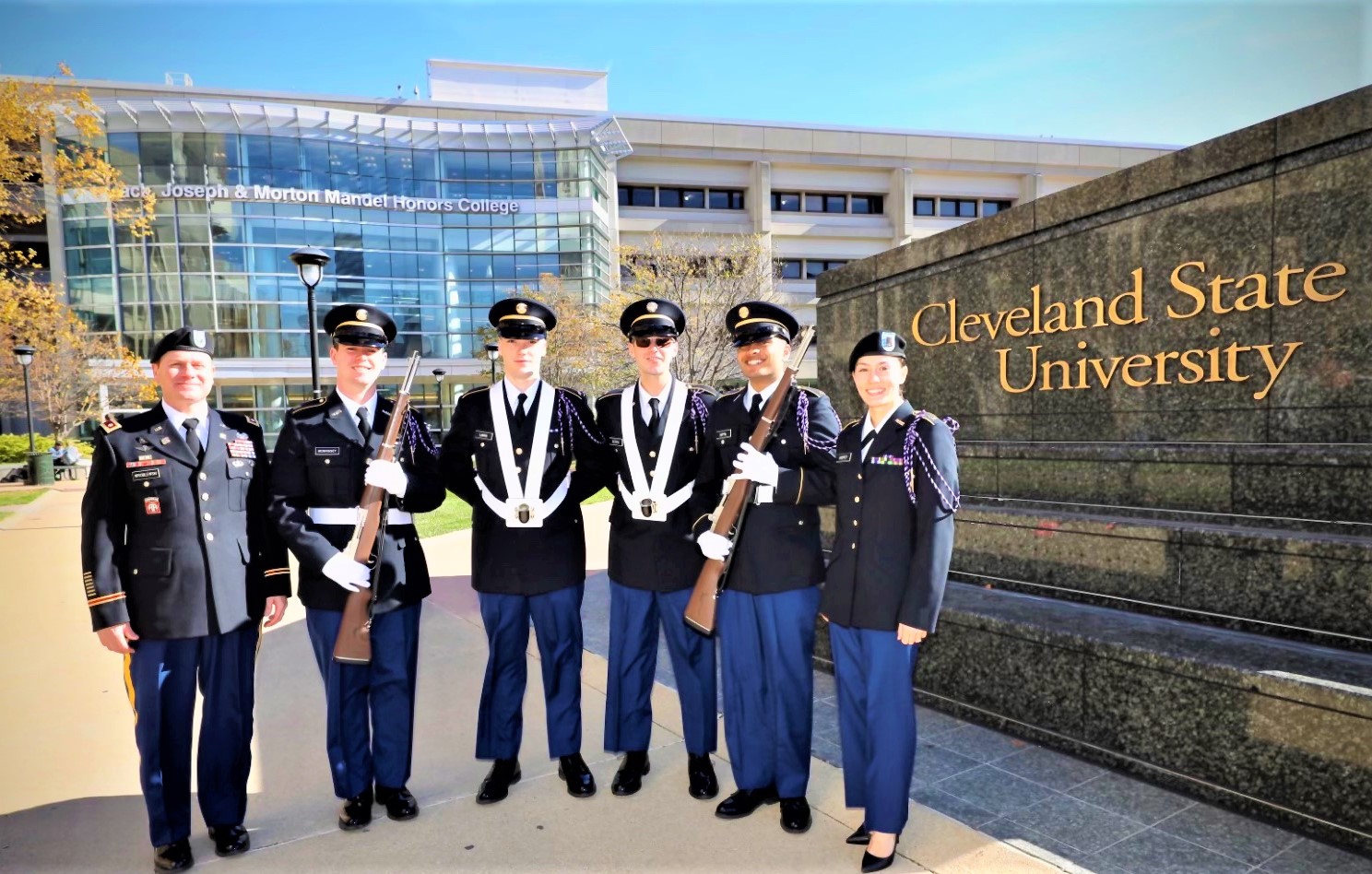 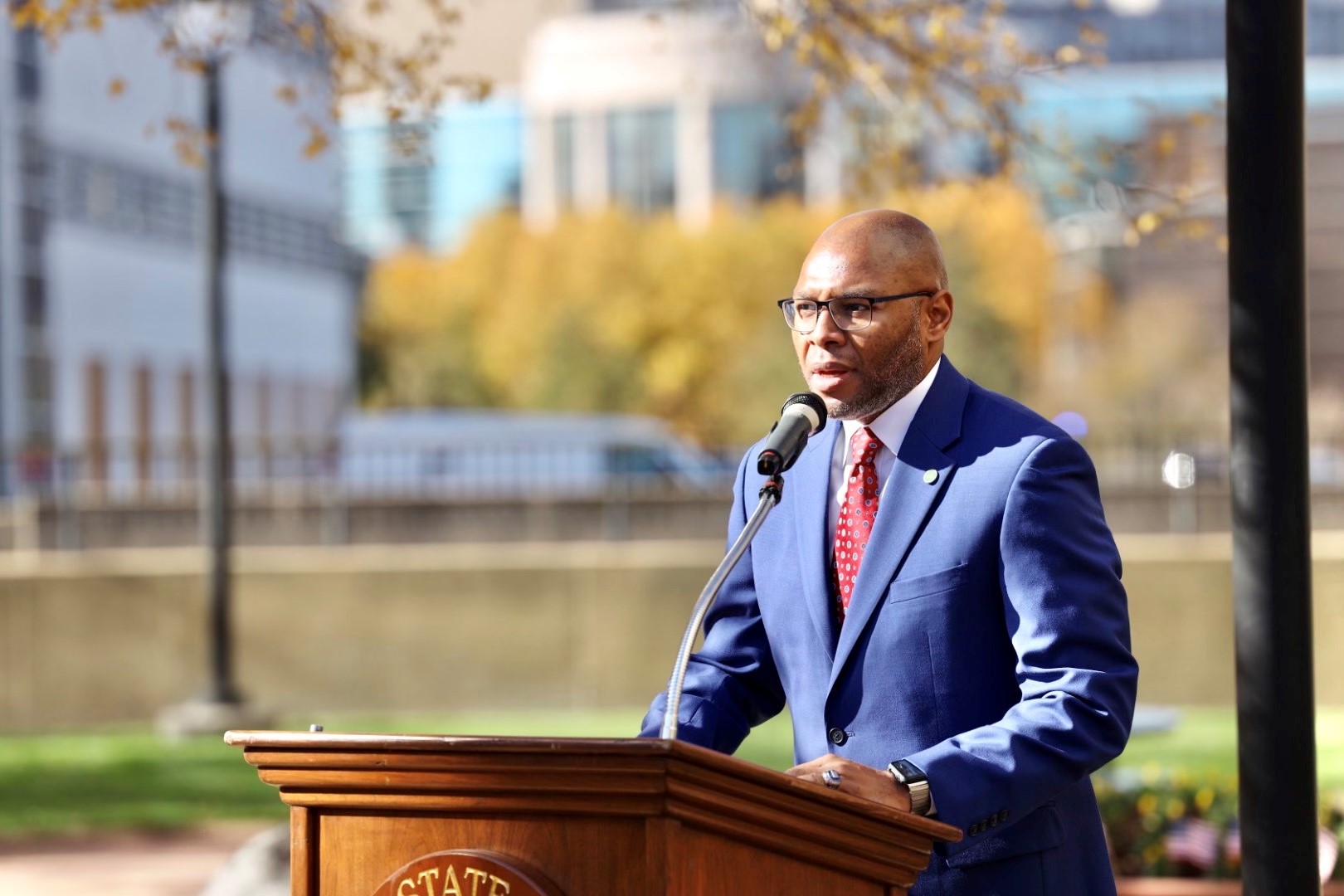 “We pause today to honor the sacrifice dedication to our CSU veterans and veterans across the country,” said Dr. Cockrell. “To our over 400 veterans who are students at CSU and served our country proudly: Cleveland State University extends our appreciation and thanks to you.”

Dr. Cockrell related the familial story of his older brother and Iraq vet, Sgt. Douglas Cockrell, Jr., and how the military connection provided comfort, a sense of community and a desire to extend gratitude to every military-connected family member he meets. He also acknowledged Emily Kullman, Ph.D., associate professor in Health and Human Performance, and interim director of CSU’s Veteran Center and CSU 2021 Student Veteran of the Year / Doctor of Nursing student Barbie Allen. 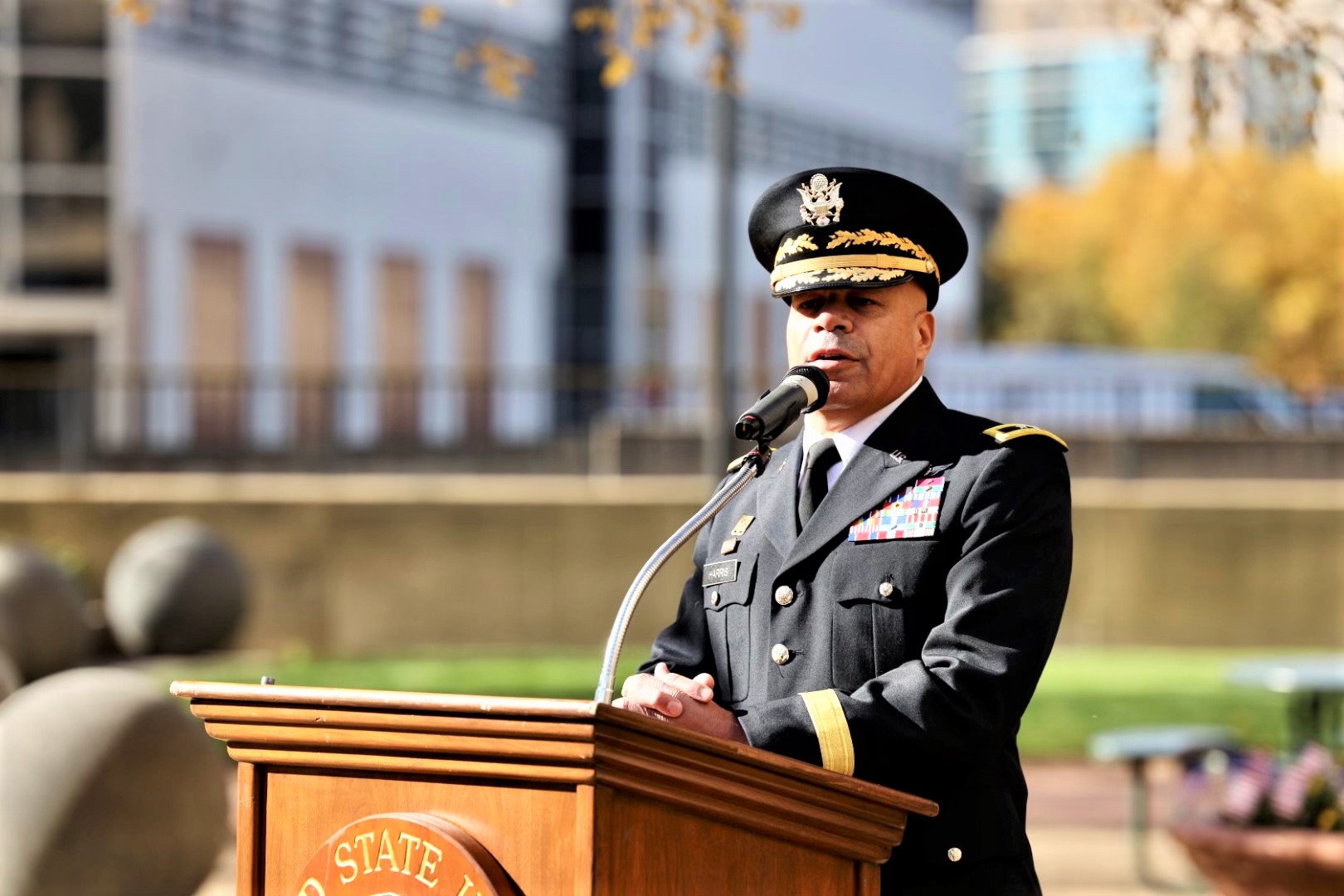 “We as Ohioans have a reputation for being incredibly patriotic and for having a high propensity to serve,” Maj. Gen. Harris said, adding that Ohio has the sixth largest veteran population in the country, places “high value” on military service, and that military recruiting goals in the state are high.

“That does not happen by accident,” the and member of Ohio Governor Mike DeWine’s cabinet added. “That happens because Ohio is a place that honors its veterans and honors those who serve, perpetuating the legacy of service from this great state.”

Maj. Gen. Harris thanked all veterans for service and suggested that “building trust” is what underpins Ohio’s commitment to military, and that it is “up to everyone to perpetuate that trust.”

He also commended President Sands for leadership and joint collaboration with the Ohio National Guard and U.S. Army on Joint Task Force Magnus, which resulted in Ohio’s Mass Vaccination Clinic at the Wolstein Center, the largest COVID-19 vaccination center in the state. 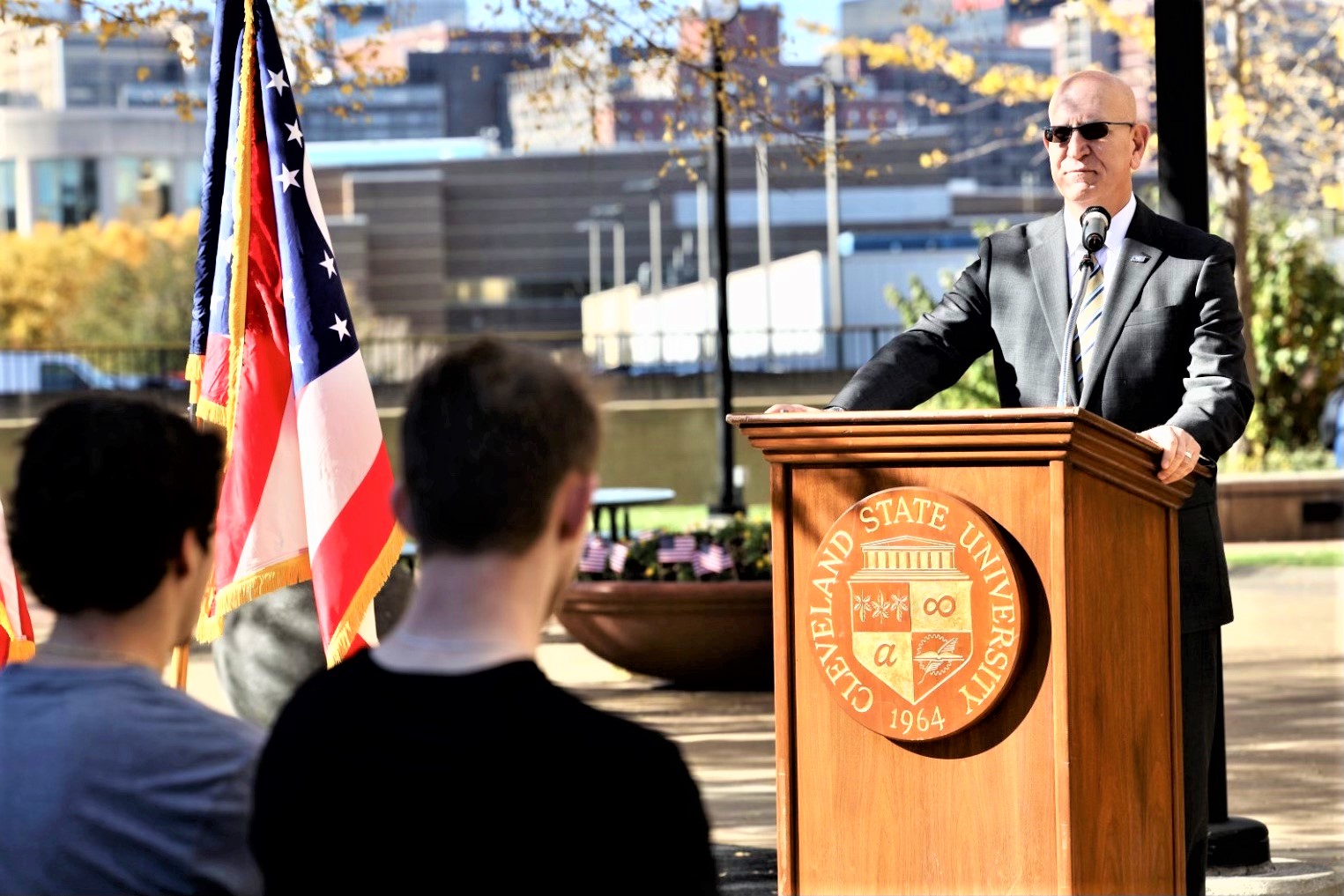 “This one’s personal to me,” said Sands, preceding a wreath dedication during the memorial and remembrance ceremony and recognizing all military-connected CSU students. “It is important that we, as an educational institution, recognize all those that have contributed to our university, especially those who have served.”

President Sands, who served on active duty for more than a decade in the U.S. Navy as a Surface Warfare Officer and Naval Intelligence Officer, received two Naval Commendation Medals during Operation Desert Storm. He said that brave military men and women “know the true costs of freedom” and set an example of sacrifice, “humility, stability and leadership.”

He added that his time in the Navy was integral to the camaraderie and trust he carries forth in life.

Sands also offered a story of his grandfather who fought at the Battle of the Bulge counteroffensive in World War II. He expressed the importance of Veterans Day as “an opportunity for [military service] stories to be shared” – even as he expressed regret for not being able to do that with his own grandfather. 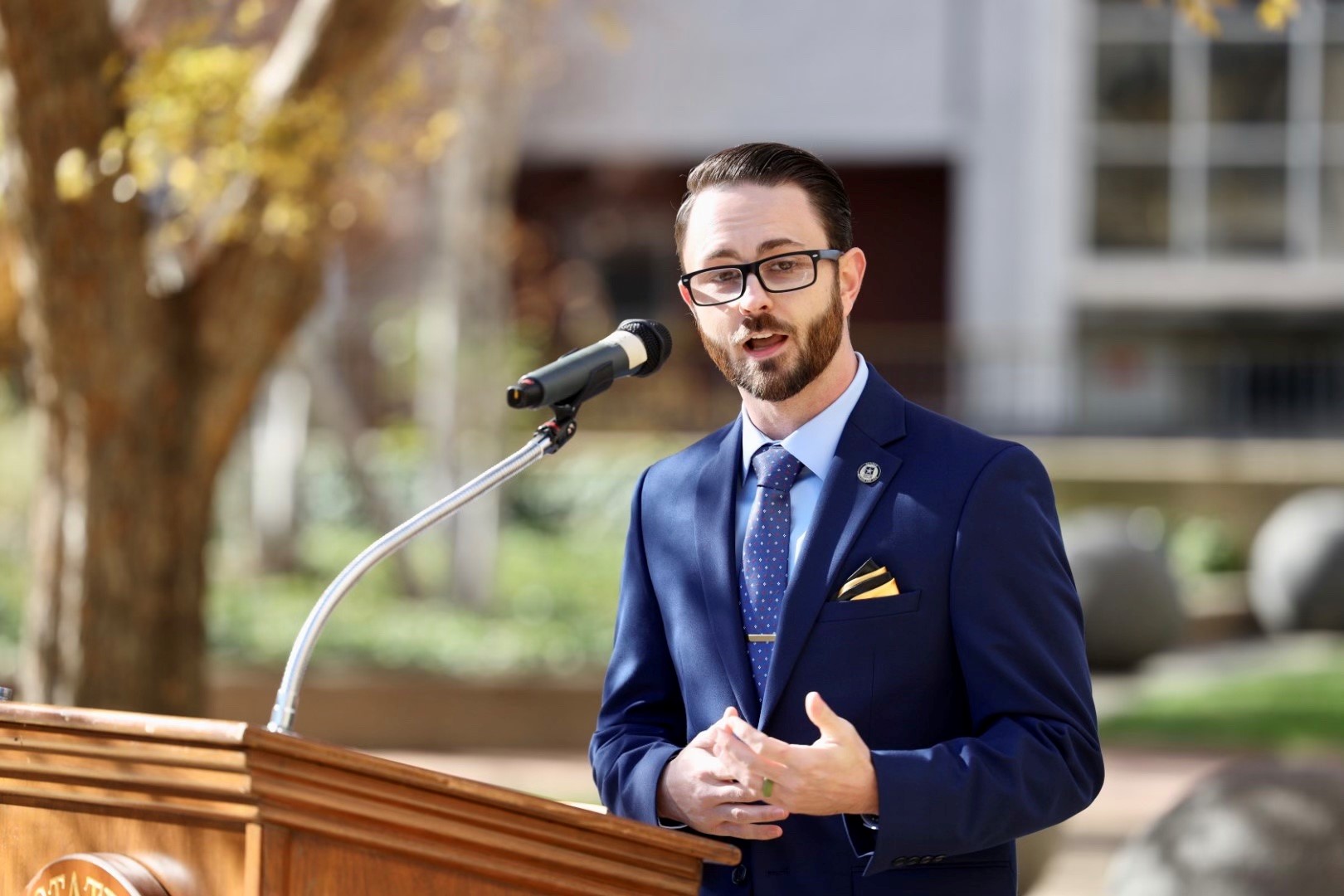 “To each and every veteran who is here today, ‘Fair Winds and Following Seas’,” Sands said, echoing the good luck salutation used in the Navy. “We are so proud of you.”

“I am one,” said Dugger, offering his remarks as a follow-up to Sands. “I’m not the first, I’m not number one, I am simply one of the roughly 580 or so military-connected students here at CSU. But if there’s one thing we are all good at, it’s telling a story.”

Army Medic and combat veteran, Dugger said that he “spent the majority of my life in combat boots” and related a story about his time in the First Infantry Division (colloquially known as “The Big Red One”) in Afghanistan as a combat medic his cohorts called “Doc.” 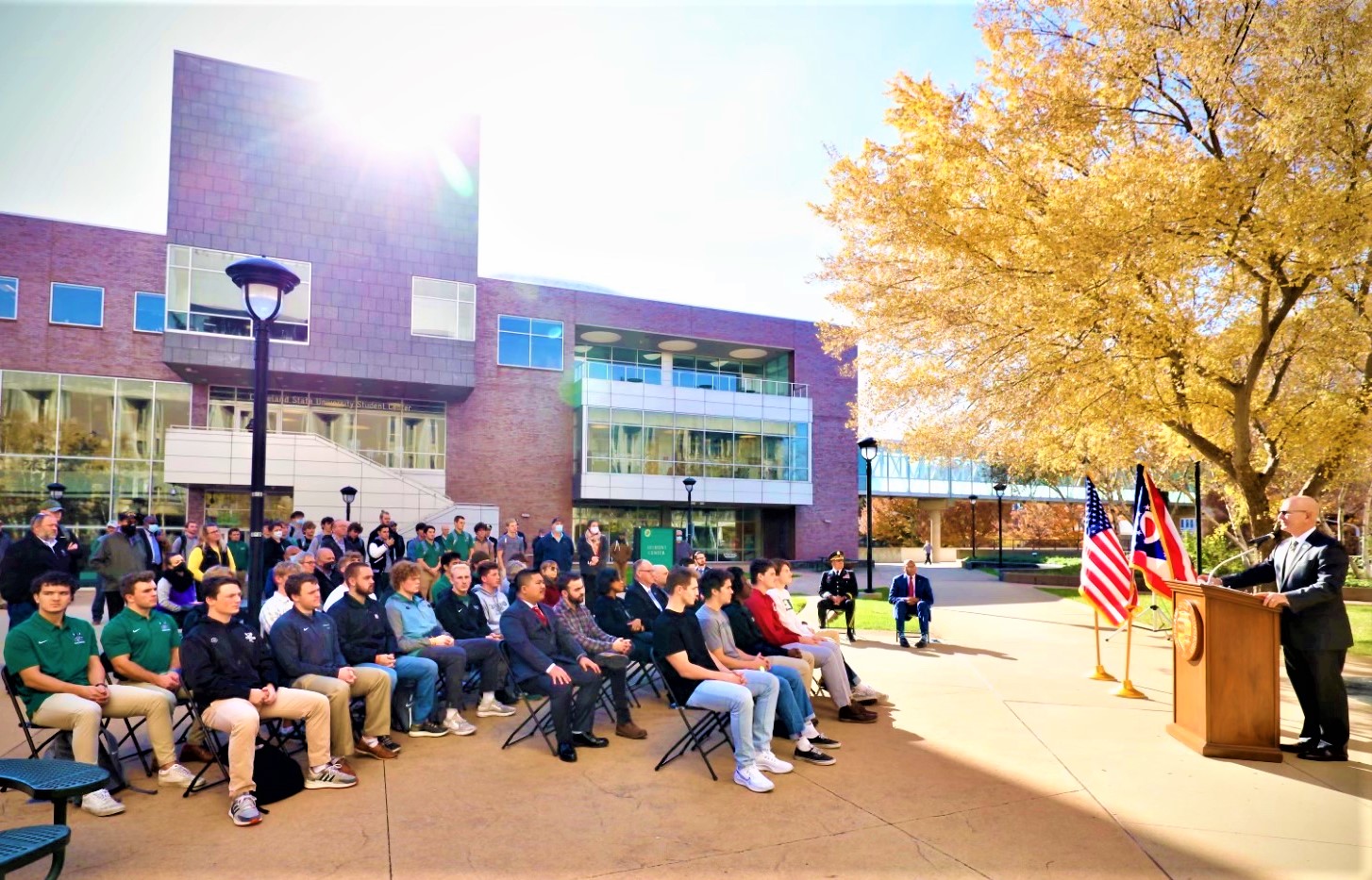 Dugger recounted helping a wounded young girl, knowing he would need to put with stitches in her forehead, but hesitated knowing the discomfort this might cause her.

“Take a breath, Doc. You’ve got this, it’s too easy,” one of Dugger’s colleagues said, adding that the encouragement went a long way. When he later removed her stitches in a future sitting, he recalled bandaging her up and handing her a bag of Skittles candy. Dugger said she gave him “the biggest best smile I’ve ever seen in my life,” one that has stayed with him to this day.

“One act of kindness is enough to change someone else’s life,” he said.

Dugger, who retired in November 2019 after a decade of active duty, is currently pursuing his marketing degree as a junior in the Monte Ahuja College of Business at CSU.

This event was held in advance of Veterans Day, Thursday, November 11, 2021, as the university will be closed on the day in observance.