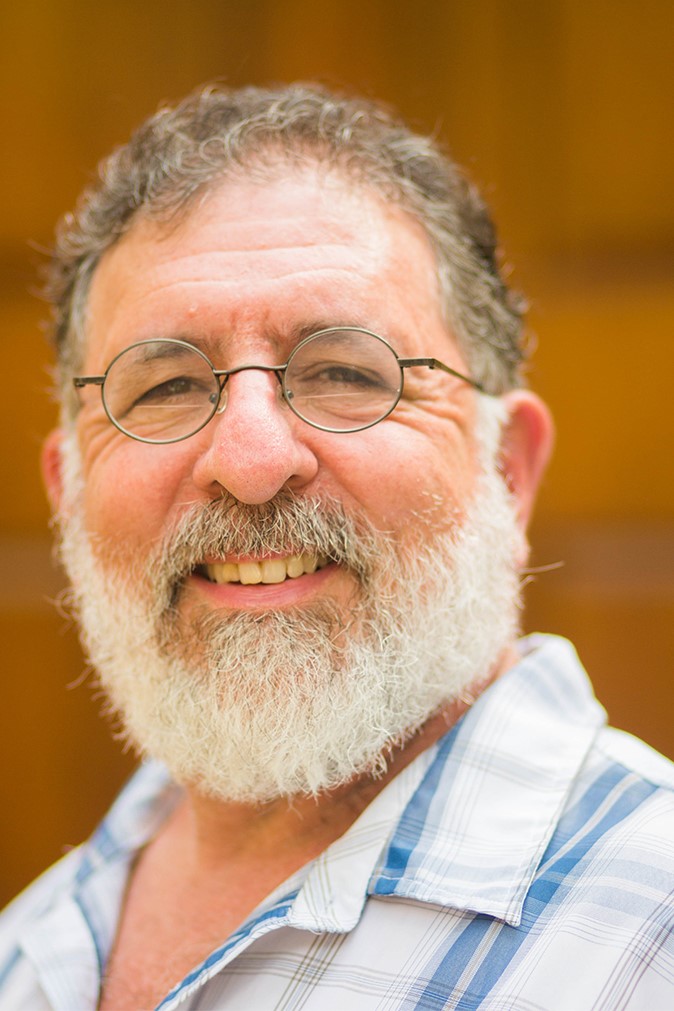 Distinguished professor emeritus, author and critic Abelman brings the Sage of the Stage to the page in notable new novella

When a local critic takes an acting role with a top-tier theater company in order to write about the experience, he gets more of a story than he bargained for.

So begins the synopsis for “All the World’s a Stage Fright,” a 128-page “fictional memoir” novella born of the pandemic and fueled by the nation’s shuttered theaters. Penned by Cleveland State University distinguished professor emeritus Bob Abelman, Ph.D. and issued by longtime Cleveland publisher Gray & Company, the irreverent work explores a theater critic’s experiences on the other side of the proscenium.

Gripped by a phobia of sage William Shakespeare, veteran writer and theater critic Asher Kaufman finds himself trying out for a production of the Bard’s rustic comedy “As You Like It” as a stunt to increase readership for his publication, the Cleveland Jewish Chronicle. Before long, Kaufman is flanked on all sides by “thin-skinned” actors whose past performances he previously panned. As one might expect, awkward hilarity ensues.

Dr. Abelman, professor in the CSU School of Communication, is the theater critic for Cleveland Jewish News and syndicated to other regional publications. Previously named Best Critic in Ohio by the Ohio Society of Professional Journalists, readers will get the sense that he is Kaufman and vice-versa in the quick-witted “Stage Fright”—which Dr. Abelman describes as a “fictionalized memoir that began as nonfiction.”

As a younger man, Dr. Abelman was also a professional actor who “appeared on Broadway and so far off-Broadway it was Connecticut.” Put it all together and laughs certainly abound. One of two titles Dr. Abelman has penned for Gray, the novella was named a finalist in the 2021 American Fiction Awards novella category late last fall.

You’ve spent many years here at CSU teaching to students. How do you feel your instructional side has informed and influenced your experiences as an author and as an actor?

Believe me, the challenge of performing a one-man show to a sold-out house pales by comparison to teaching an introductory course in a huge lecture hall filled with first-semester freshmen. I have no doubt that lecturing has informed my acting and putting together a lesson plan has improved my creative writing as a novelist. 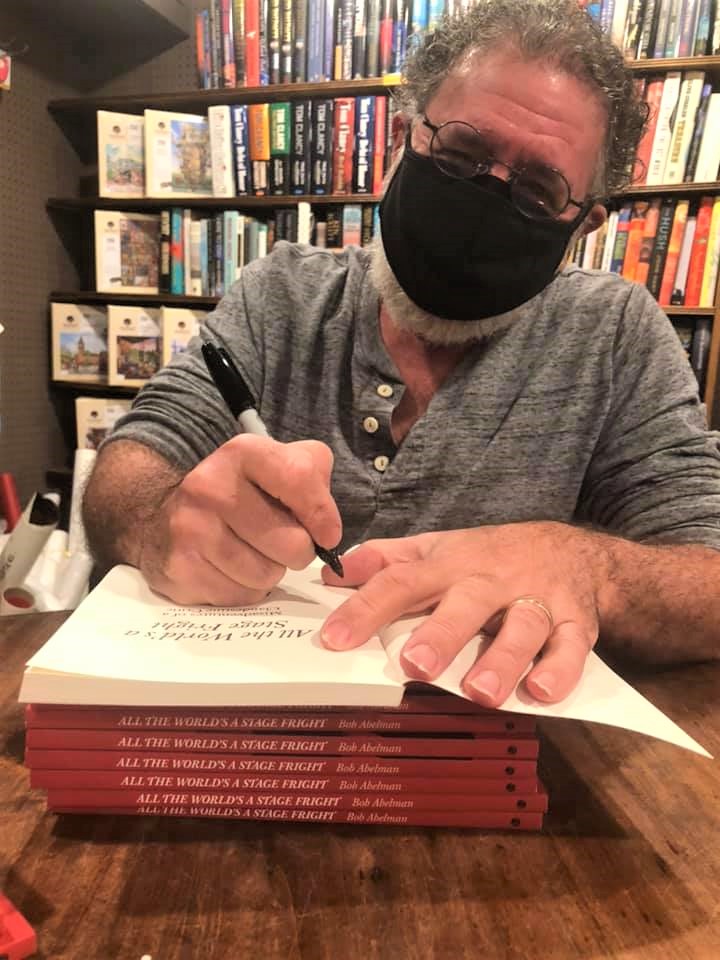 Your two novellas fall under a series title “Misadventures of a Clandestine Critic.” It sounds like there could be more on the way. Do you have these mapped out, and if so, what can readers expect to see in the future?

There’s no map. During the first month of the pandemic, when local theaters were shutting down, I had read that when recurring bubonic plague outbreaks hit London in the early 1600s – when the Globe Theatre and other playhouses were shut down – William Shakespeare continued to put quill to parchment and wrote some of his best plays while in quarantine. As a theater critic with nothing to review, I continued to write about theater, just not for a newspaper. The novella “All the World’s A Stage Fright” was published eight months later and has found an audience. With the continued cancellation of theatrical productions due to the coronavirus variants, the sequel “Murder, Center Stage” – an Agatha Christie-like whodunit set in a production of Stephen Sondheim’s “Sweeney Todd” – recently hit the bookstores. Here’s hoping that, in 2022, there’s no need for a trilogy. Though I do have some ideas.

How did the book partnership with the Cleveland Jewish News come to be?

It’s not easy for a new novelist to find a publisher and break into the fiction business, especially when the work is a funny novella. I’ve written over a dozen books with several academic publishing houses but none, I discovered, has a popular fiction wing. On a whim, I reached out to the publisher of my newspaper, who also publishes magazines, to see if he had given any thought of becoming a book publisher. He had not, but he introduced me to a local publisher of nonfiction who was willing to give my novella a shot and he said that the CJN could be a promotional partner.

These novellas are a lot of fun to read; were they as fun to write?

Absolutely. The first one is a fictionalized memoir, and there’s all kinds of pleasure to be had making actual events and people funnier than they were in real life. The sequel is a murder mystery, and there’s a different kind of pleasure shaping life so that it conforms to the rules of the whodunnit genre. Writing these books was like blowing wild balloon animals. 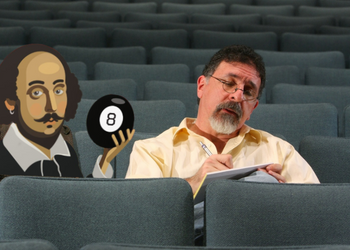 Knowing these books began autobiographically, walk us through the Venn diagram intersecting Kaufman and Abelman. How much are they the same… and what separates the two of you?

Asher is taller, better looking, and less functional. Otherwise, it is certainly my voice coming out of his mouth.

“This is a work of fiction. Any similarity to actual persons, living or dead, or actual events, is purely coincidental.” That rote cut-and-paste legal rider isn’t in the novella anywhere, but we know the Cleveland Jewish Chronicle is inspired by CJN and that Asher has a lot of you in him. Surely a couple of these other characters have some real-world inspiration.

Every character is grounded in or a composite of people I have worked with in the Cleveland theater scene. But like I said earlier, everyone is a balloon animal. I turned my real life, soft-spoken editor into a character straight out of central casting from the 1928 comedy “The Front Page.” Like the characters in that play, he became a fast-talking, hard-boiled, big-city newshound. Like them, he wears suspenders, as if the news cycle was so unrelenting that there was no time to strap on a belt.

We are slowly reengaging in live stage performance after a long layover. From a media criticism perspective, what have we lost collectively during this absence of stage performance—aside from, say, the art itself and the collective consciousness associated to it?

We – artists, audiences, and critics – lost a sense of community. But that will return as soon as being on both sides of the proscenium once again becomes non-risk and normative.

Have you been back to the theater since the pandemic began to subside? And what productions are you looking forward to seeing once you’re back at full steam as a critic?

I have been back, and it felt like I was whole again. I’m looking forward to theater companies regaining their rhythms, putting together an entire season, and getting back to business. 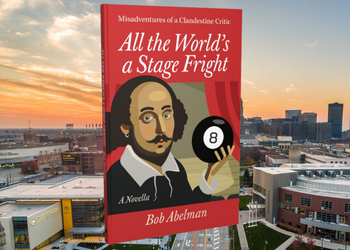 How are changes in media over the last 20-25 years impacting theatre, from your perspective?

Well, there’s been the Disneyfication of musicals, which has created a plethora of family-friendly shows based largely on animated movies, like “The Lion King” and “Frozen.” For a while there, Broadway theaters resembled theme parks and most of those shows are currently on national tour. But there has still been room for understated shows like “Come From Away” and “The Band’s Visit,” as well as innovative works like “Hamilton.” CGI and a cinematic sensibility have also worked their way into theatrical productions, for good and bad.

Looking ahead, what kind of changes and adjustments to live theatre do you imagine will become permanent, so that arts communities can count on greater sustainability?

If I had the answer to this, I would be a producer, not a critic/actor.

Guess we’ll need a Magic 8-Ball for the answer to that one… In the meantime, learn more about Dr. Abelman’s new novella by clicking here.