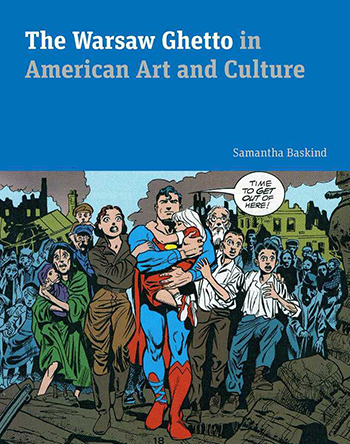 On the eve of Passover, April 19, 1943, Jews in the Warsaw Ghetto staged a now legendary revolt against their Nazi oppressors. The deprivation and despair of life in the ghetto and the dramatic uprising and bravery of its inhabitants have captured the American cultural imagination and influenced generations of social and political activists. In her new book, The Warsaw Ghetto in American Art and Culture, Samantha Baskind, a professor of art history at Cleveland State University, assesses how the Warsaw Ghetto and its story have intrigued Americans, Jews and non-Jews alike, and how the events of April, 1943 have been remembered in fine art, film, television, radio, theater, fiction, poetry, and comics.

“The Warsaw Ghetto Uprising, viewed as a glimmer of bravery and hope amid crushing devastation and loss, has served as a touchstone for post-Holocaust Jewish identity. The uprising has long outlived the actual historical event in varied and often surprising ways,” notes Baskind. “My book chronicles how this moment of courage against all odds influenced art, film, and literature, alongside many other cultural pursuits. At the same time, though, the festering ghetto – aside from the uprising – serves as a crucial example of the unfathomable squalor and desperation experienced by Jews during the Holocaust, as depicted by cultural producers from 1943 to the current time.”

The book, published by Penn State University Press, explores over seventy years of artistic representations of the ghetto and its now mythologized resistance effort to understand why they became and have continued to influence American culture. Baskind reviews iconic works such as Leon Uris’s best-selling novel Mila 18, Roman Polanski’s Academy Award–winning film The Pianist, and Rod Serling’s teleplay In the Presence of Mine Enemies. She also analyses the art of Samuel Bak and Arthur Szyk, the poetry of Yala Korwin and Charles Reznikoff, and a special anniversary comic book where Superman swoops into the Warsaw Ghetto to save its trapped inhabitants. In probing these works, Baskind pursues key questions of Jewish and American identity: What links artistic representations of the ghetto to the Jewish diaspora? How is art politicized or depoliticized? Why have Americans made such a strong cultural claim on the uprising?

“The Warsaw Ghetto has long captured the imagination of novelists, poets, and artists,” notes Samuel Kassow, the Charles H. Northam Professor of History at Trinity College and author of Who Will Write Our History. “Samantha Baskind’s wide-ranging and highly original study of the uprising’s impact on American art and culture is a major contribution to our understanding of Holocaust memory”

Baskind is a noted art historian with a focus on twentieth-century American art and culture and the role of the Jewish American artist in the modern world. She is the author of six books, including Jewish Artists and the Bible in Twentieth-Century America, Jewish Art: A Modern History and Encyclopedia of Jewish American Artists. Prior to joining CSU she taught at the University of Miami, James Madison University and the University of Pittsburgh.