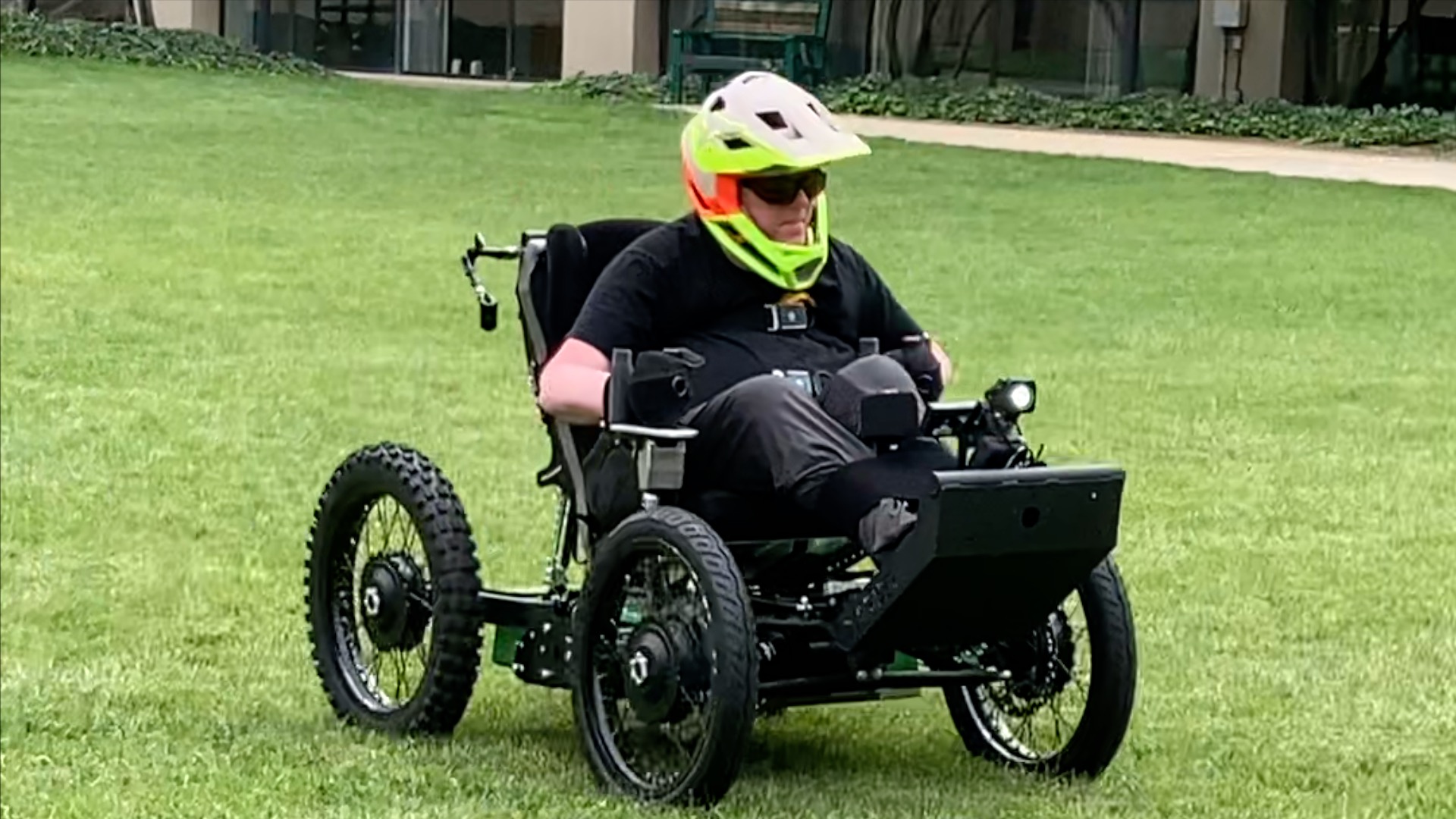 On Friday September 9, members of the Cleveland State University community participated in an event called “The Big Reveal.” The afternoon event, held at Ray’s Indoor Mountain Bike Park (Ray’s MTB to locals), was named for the unveiling of a new bike park entry mural painted by artist Eileen Dorsey.

CSU’s involvement in the event was an equally big reveal.

First, some backstory: Ray’s MTB founder/owner Ray Petro opened the world’s first indoor bike park in 2004 right here in Cleveland to world renown. He did so because of his frustration “in the inability to ride during the cold winters in Ohio,” investing his life savings in the idea.

Fast forward to 2017, Petro was involved in a serious mountain biking accident, one that resulted in a high spinal cord injury that sidelined him indefinitely from the hobby he loved most.

Enter CSU’s Spinal Cord Injury Volunteer Corps (SCIVC), an outgrowth of the Washkewicz College of Engineering. In partnership with the Center for Human Machine Systems (CHMS) Lab and The Manufacturing Advocacy and Growth Network (MAGNET) facility, members of the SCIVC incorporated a power-steering unit onto Petro’s four-wheel adaptive bike—which, as you’ll see in the accompanying video, makes it easier for him to steer and maneuver…

“The mission of SCIVC is for students to assist people with Spinal Cord Injuries (SCI) on home projects that are otherwise not covered by insurance, in addition to providing volunteer aid for miscellaneous tasks needed by the SCI community,” said Skye Carlson, president of the SCIVC and second-year doctoral student in the Applied Biomedical Engineering at CSU.

“Over the [course of a] few weeks, our team of Steven Wilson, Kyra Stovicek, Tyler Tokarcik, and myself designed a way to adapt an electric power steering unit onto an adaptive four-wheel bike for Ray, one consisting of an attachment bracket and necessary linkages.”

Wilson and Stovicek are both recent graduates (Class of 2022) of Mechanical Engineering at CSU; Tokarcik is a former student at CSU and a current mechanic apprentice for industrial equipment. All team participants were in attendance, as was CSU assistant professor Eric Schearer, Ph.D., who oversees the SCIVC and helped manage the project.

At the event, Petro was visibly moved by the spirit of the day, flanked by CSU dignitaries including CSU Provost Nigamanth Sridhar, Ph.D. The event was emceed by Thomas Mulready of CoolCleveland, a close friend to Petro and staunch advocate of the bike park from its inception. Mulready and his band Vanity Crash also performed at the event.

“Thank you very much again for this almost 20-year adventure,” Petro said to the audience.