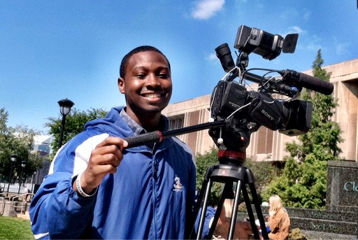 As a multimedia journalist for WKYC-TV, Cleveland State University alumnus Brandon Simmons frequently travels across the Greater Cleveland region. On September 19, he had an opportunity to return to his alma mater to shoot live coverage of CSU’s 50th Anniversary Block Party — and discovered much about campus had changed.

“When I was a student, the transformation at CSU was just starting,” Simmons told ENGAGED. “We didn’t have the new Student Center. We still had the University Center and Viking Hall. Now campus looks more like a destination… it has more of a college feel.”

He started at CSU as an accounting major, but ultimately switched to digital media to pursue his longtime interest in audio and visual technology.