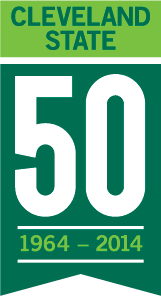 Cleveland State University to kick off its 50th anniversary in September 2014, including the biggest block party Cleveland has ever seen.

Beginning September 2014 and running through June 2015, Cleveland State University will celebrate its 50th anniversary with special events involving the entire campus community, alumni and the city of Cleveland.

The celebration will feature a parade and block party on Friday, September 19, that will close down Euclid Avenue, and continue that weekend with Homecoming festivities. Over 120,000 alumni and friends of the University will be invited to join in the weekend of music, food, sporting events and fireworks that will take over the campus.

For the convenience of out-of-town guests and alums, Homecoming weekend was moved up to coincide with the 50th Anniversary kick-off. The annual Distinguished Alumni Awards will be held on Thursday, September 18.

Additional plans for the momentous 50th Anniversary celebrations are in the works and a full schedule of events will be released soon.