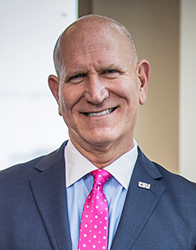 ​​​​​​​​​​​​​​MBWA - Management by Walking Around - is something Harlan Sands learned in the military, and it is a practice he has carried into his career in higher education. Whether he is walking and talking with students on campus, visiting staff in their offices, or more recently, “zooming” into remote classrooms, his high-energy, hands-on approach demonstrates his passion and commitment to the Cleveland State University (CSU) community.
As president of CSU, Cleveland’s only public research university, since 2018, Sands has accelerated the University’s upward trajectory as a Carnegie high research institution nationally recognized for quality, access, affordability, and social mobility. Additionally, the Brookings Institution ranked CSU 18th in the nation among public universities that provide social mobility for their students and conduct vital research that benefits society. Since joining CSU, overall enrollment and progression rates are stronger than ever, boasting the largest fall freshman class in history in 2019, an increase in graduate enrollments in 2020, and increases in retention and graduation rates across the board for all student groups.

Throughout his academic career, all at urban-serving universities, Sands has always focused on meeting the unique needs of his students. Earning two of his degrees part-time at night for six years while serving full-time on active duty in the U.S. Navy, he understands the challenges faced by many non-traditional students, and is fully invested in CSU’s Engaged Learning approach that transforms lives, connects students to career opportunities, and contributes to the growth and vibrancy of the community.

Sands came to CSU from the Wharton School of Business at the University of Pennsylvania, where he served as Wharton’s Chief Financial Officer and Chief Operating Officer. Prior to his time at UPenn, his more than 20 years of experience as a higher education thought leader, academic administrator, business process transformer, teacher and student advocate also included leadership positions at the University of Louisville, the University of Alabama at Birmingham, and Florida International University.

Prior to his career in higher education, Sands practiced law as an assistant public defender in Miami, where he litigated more than 50 trials in state and county courts representing indigent clients.

He also served on active duty for more than a decade in the U.S. Navy, including service as a Surface Warfare Officer on the USS Guam (LPH-9) and several tours of duty as a Naval Intelligence Officer. He received two Naval Commendation Medals during Operation Desert Storm.

He holds a B.S. in Economics from the Wharton School of Business at the University of Pennsylvania, an M.B.A. with a major in Finance from George Washington University, and a J.D. from George Mason University.

Sands is a native of Wantagh, New York. He and his wife Lynn have two sons, Samson and A.J. 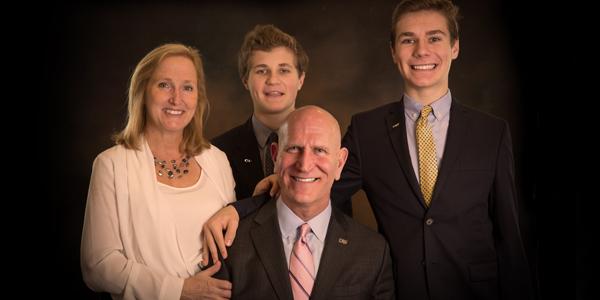