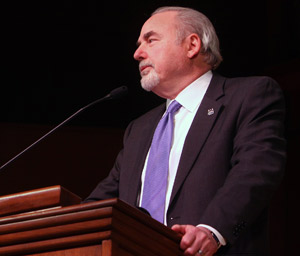 Watch video of the ceremony.

University Highlights is a representation of selected University achievements as submitted by academic units on or before January 18, 2010.

I would like to begin by offering congratulations to William M. Bowen, Michelle D. Chinoda, Dena S. Davis, Kim Hurn, Barbara K. Modney, Murali D. Nair, Marjorie Pacek, Jearl D. Walker, and Chrystal M.Weyman for the awards they are receiving for their work in teaching, research and service.

This year is a year of “firsts” for me, and today is another – delivering my first Convocation Address, or as it is also called, the “State of the University.”

I have received a warm and welcoming reception from students and faculty, as well as from the community leaders, including Mayor Frank Jackson, and Cleveland City Council, and state leaders including Governor Ted Strickland, President of the Ohio Senate Bill Harris, Speaker of the Ohio House of Representatives Armond Budish and Chancellor Eric Fingerhut.

We are fortunate to have state leadership that is committed to education and higher education, recognizing that the transformation of the region depends upon dramatically increasing the baccalaureate attainment rate.

Locally, progress in baccalaureate educational attainment by the workforce is making a noticeable impact in our economy. A recent report by TEAM NEO – one of our regional economic development organizations – cited the increasingly educated workforce of the region as a key factor in stimulating a stronger recessionary recovery that is currently underway.

Aligning outcomes in regional economic performance with our work to increase the educational and employment attainment of our students and graduates, offer an important indicator of progress and connection for this University. As an urban university tied to our urban environment, our research and pedagogy should reflect who we are and what we are: Engaged learning; a research agenda in urban sustainability and urban health; research partners such as NASA, the Cleveland Clinic the city of Cleveland and the state of Ohio.

There have been many note-able achievements by the faculty, students and staff of this University. Rather than a recitation of these achievements, we have produced a review of our collective work. A highlights booklet will be distributed to you as you depart the auditorium today and e-copy is available through the University web page. At this time, I will briefly mention a few special achievements.

We envision a medical education program leading to an M.D. degree given collaboratively with NEOUCOM that seeks to train students interested in primary care with a focus on urban health issues.

As we work together to achieve these great advances for our institution, our state our region and beyond, we can embrace our character as a young institution that has considerable identity on the landscape of American higher education.

For example, the great arbiter of public perception of higher education is the yearly rankings of the U.S. News and World Report. There are approximately 3,000 accredited institutions of higher education. To determine rankings, U.S. News surveys administrators at peer institutions and also considers up to 15 other academic indicators including graduation rates, student retention, standing of the student body and faculty resources. I am proud that Cleveland State University is recognized by U.S. News in the national university category.

In terms of our growth as an institution of choice for students, enrollment is at a fifteen year high (undergrad, grad and law). There are 16,542 students at last count. Approximately 6,000 are graduate students. Given that we have the largest percentage of graduate students in the state, it is particularly important that we become innovative in this domain. The recent appointment of Dr. George Walker, a national leader in research and graduate education, as Vice President of Research and Graduate Studies, will offer the leadership we need to realize our goal of developing nationally innovative graduate education and growing an urban research university.


We are in an exciting period, an upswing, as we bring more students to live on campus, build our neighborhood, and form vital partnerships with the Cleveland schools, Tri-C, medical institutions, Playhouse Square, the city of Cleveland and the state of Ohio.

We look forward the openings of the:

Much good work has been done and there is much still, to do. Let me briefly define some key challenges. I emphasize that these challenges cannot be met without the energy, creativity and commitment of the faculty.

I am committed to working to realize the goal of making Cleveland State University a unique regional asset and a premier urban research university.