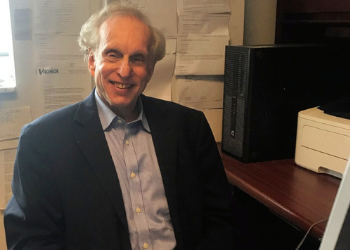 Alan Canfora was a victim of the May 4, 1970 shooting at Kent State University

Cleveland State University communication professor Richard M. Perloff, Ph.D. has earned a first-place honor from the Press Club of Cleveland for his journalistic article memorializing Alan Canfora—a victim of the May 4, 1970 shooting at Kent State University.

On that fateful day 50 years ago, the National Guard killed four students and injured nine others including Canfora, “who defiantly waved a black flag before a bullet pierced his wrist,” Dr. Perloff wrote. Thrust into national prominence by Pulitzer Prize–winning photographer John Filo, Canfora famously called the shooting an "intentional massacre" and was largely responsible for the designation of the May 4 site as a national historic landmark.

Canfora became the very public face of a social justice crusade at KSU, a movement now entering its sixth decade.

Dr. Perloff, longtime professor of Communication, Psychology, and Political Science at CSU, originally wrote about Canfora’s passing in The Plain Dealer and Cleveland.com back in 2021. A nationally known scholar of the psychology of media perceptions, persuasion, and political communication, Dr. Perloff’s reflections often appear in journalism venues.

His previous reflections on the May 4, 1970 events at KSU have appeared in The New York Times.