Angel of Warsaw: One Viking’s Experience with the Russo-Ukrainian War Do a quick Google search on Cleveland State University grad Angelo J. Pressello and you’re likely to find many entries in Polish. That’s because he arrived in Poland in 1994 for a two-year assignment as a Peace Corps volunteer after earning his Bachelor of Arts in International Relations from CSU.

The short version of the story is, Pressello never left; he made Poland his home.

The longer version continues below.

Extroverted Viking alumnus and storyteller that he is, Pressello knows his elevator speeches inside and out. He is quick to explain how he flew into Rzeczpospolita Polska with no preconceived notions, after expecting to be placed by the Corps “somewhere in Africa or South America.”

Quicker still, he adds that his whereabouts were fortuitous almost immediately: he met his future wife in Poland moments after he got off the plane, though it would be a while before they wed. He started his family in Poland, too.

Everything else fell in line: Pressello earned an MBA from the Warsaw School of Economics (via the University of Minnesota). He joined IT development company Directpl in Warsaw in January 2004 as sales director. Nearly a decade later, he became the owner/president and CEO of the company.

Today, Directpl has offices in Warsaw, Chicago and Manila, Philippines. They offer outsourced professional solutions for companies around the world.

Pressello was recently named to the Board of Directors of the Polish-U.S. Fulbright Commission for his strong business background to expand efforts in promoting science, technology, and innovation.

Lately, however, Pressello’s geographic location has been vital on a whole other level. 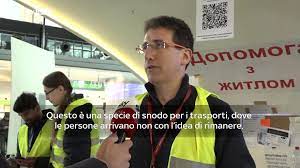 hen Russia invaded Ukraine in February of this year, marking a steep escalation of the ongoing Russo-Ukrainian War that began in 2014, it put the spirit of Pressello’s International Relations degree to the test, front-and-center.

“I had to do something,” the former Clevelander recalled from his office in a recent interview. “There was no time to weigh options; this was and is an instant humanitarian crisis, and time to act now.”

The history buff recounted that “everything suddenly became a movie” on that late February day.

“Being so close to the Ukrainian border, we all saw everything escalate to surreal levels in a flash,” Pressello said. “Thousands of people were spilling over the border, most in retreat, but some were charging forward and across to defend Ukrainians, too. Poland has its own history with Russia, you know? There are very long memories here and some have a very short fuse about it all.

“Ever seen people our age making Molotov cocktails, let alone running down Euclid Avenue with them? Me neither,” he said.

“Not until now, anyway. This was the kind of historically documented bedlam you see on a screen, in a book, or something you study in a CSU classroom well after the fact, man,” Pressello added.

“And we were living it in real time. More than half a million people crossed into Poland in a week. There was no way not to get drawn in,” he said.

“My work colleagues and I participated in massive, almost-daily street demonstrations about the war, which were weird because they were done in full view and support of the authorities,” he recounted. “That almost never happens.”

Rallying (for) the Troops, Humanity, Dignity and Empathy 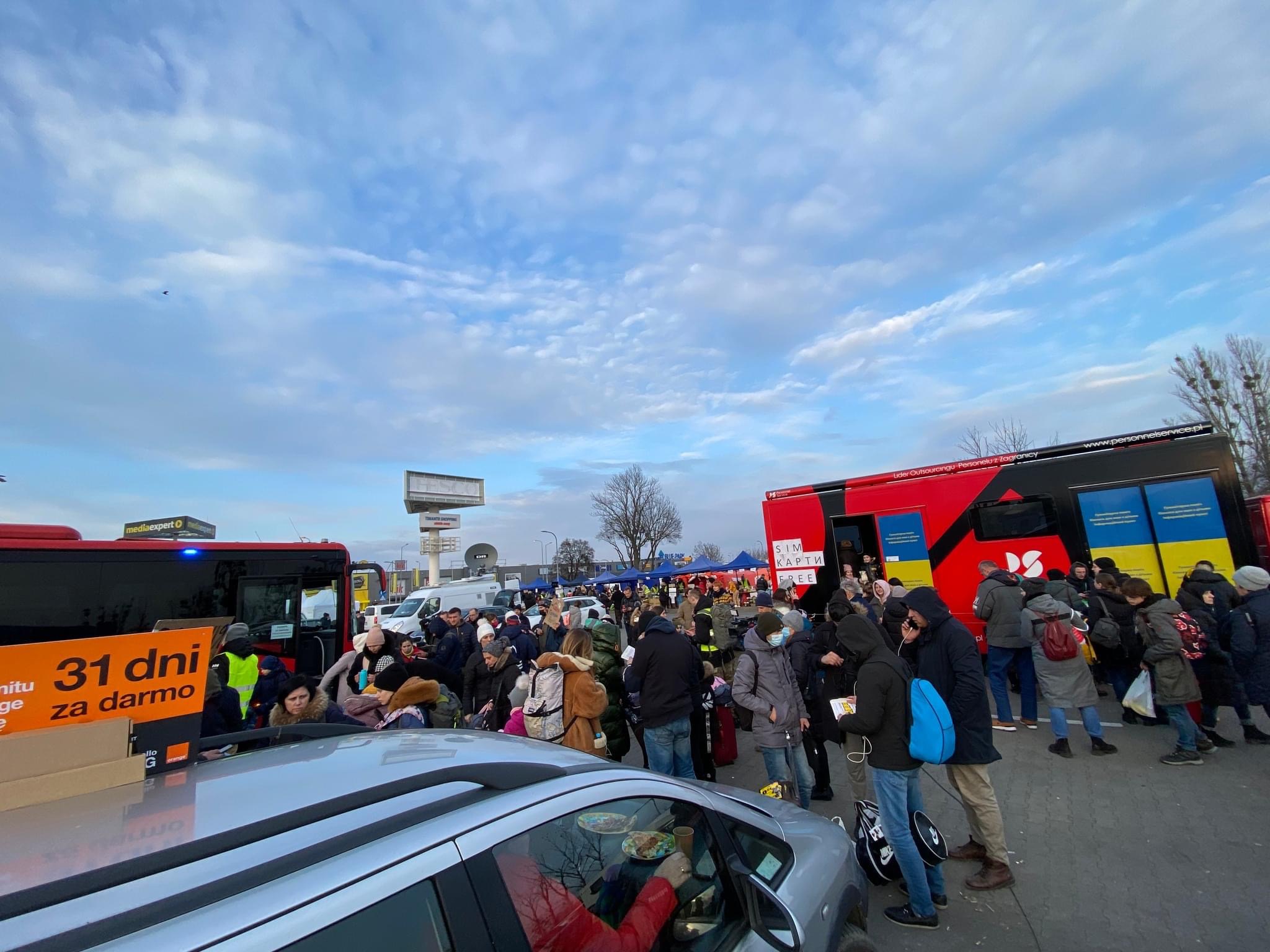 “It always feels inadequate to write dumb Facebook posts about a serious event like a death or, in this case, a major tragedy,” Pressello would write on his Facebook page days before his donation drive began—calling February 24 and everything to follow “a tsunami of suffering.”

He recounted in posts thereafter about his many trips from Warsaw to the Ukranian border—“three-hours-one-way journeys,” where he did everything from shuttle family members to relatives’ safe havens in Poland, to connecting refugees with food and shelter, to manning refugee border stations to help with Ukranians’ safe passage.

“Scenes of Ukrainian soldiers kissing their wives and children goodbye, families leaving family behind, these were daily experiences,” Pressello said, getting choked up for the first of many times during the interview.

“I picked up a mother and daughter. The daughter has a little backpack, that's it. So, I put it in the empty trunk of the car. The only other thing they had was a building address in Warsaw and a phone number.

“It took me two hours to work up to asking, ‘You only have that one little bag?’ And [the mother] explained two nights of bombs falling; her daughter sleeping in the bathtub ‘in case of shrapnel,’ and a last-minute notice of a bus that would eventually help get them out of the country,” he said.

There is a long sigh. Father that he is, Pressello shakes his head, wipes away tears and collects himself.

“It was all pretty harrowing. And [refugees] won’t take anything, you know? There’s trauma and grief, but there’s pride. And so, after a four-and-a-half-hour drive, we parked outside. It’s the middle of the night. I called the number and said, ‘Hello. We’re in front, please come down,’” he said.

“When [the woman’s] aunt emerged from the building and began to run to us, the daughter looked back at her mom for the OK, and then ran to her,” Pressello recalled. “They all jumped into each other’s arms like they had all come back from the dead.” 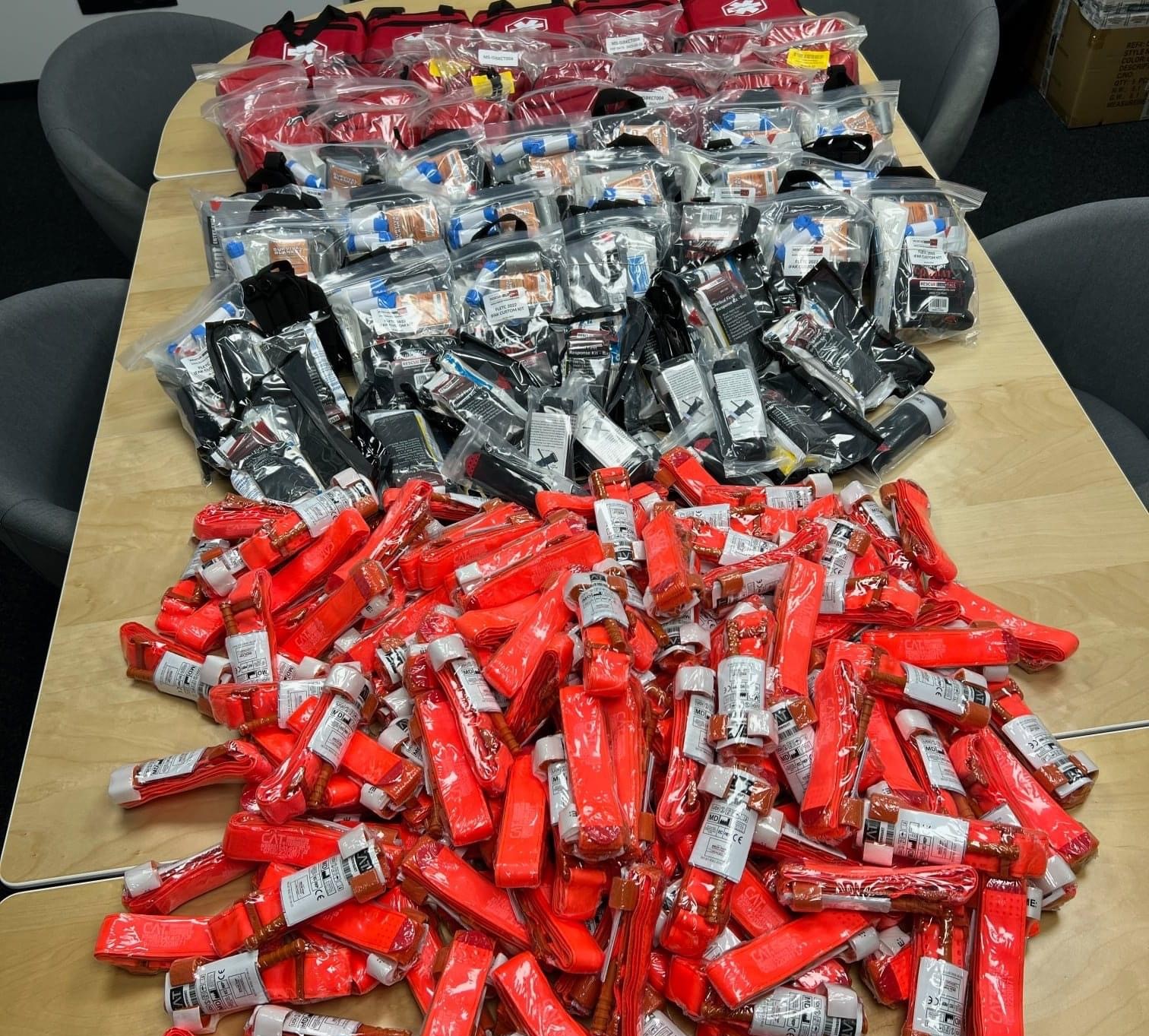 Pressello would rally his Directpl employees and social media platforms, asking the former for any assistance they could provide and the latter financial donations “of any amount” to help war injured Ukranian soldiers on the frontlines with critical medical supplies.

“There were plenty of clothing and household donations happening already, and we had proper medical advice right out of the gate, so we knew we would go in a different direction” Pressello said.

Pressello’s ask to social media friends, family and followers yielded $11,000 in PayPal, Venmo, bank wire transfers and cash donations in 24 hours. He was up to $16,000 in 48 hours’ time and would cross the $20,000 mark with help from all over his spheres of influence.

One of over 140 donors, CSU alumna Joyce McCartney (BA, 1994), relayed the hope she had seeing “humanity in action” on Pressello’s Facebook page. That theme was reflected in many comments that came before and followed.

Referring to a Ukrainian doctor who was passing through Warsaw on the way to Ukraine, Pressello and his team reached out and “got a depressing list of needed medical supplies” from him.

“This included tourniquets, Celox rapid powder (a blood-clotting agent), gauze bandages, and pediatric neck braces,” he said, pausing as the enormity washed over him again.

Just the same, Pressello found the items scarce, expensive and knew he “could do better with the funds entrusted to me, offer a better chain of custody.” So, against his desire to leave Poland at such a critical time in the war, he endeavored an already planned business trip to Directpl’s office in Chicago.

The trip would yield more affordable options he could bring or ship back… options that would end up involving another old friend, who also happens to be a Viking alumnus.

Supplies with a Little Help from His Friends 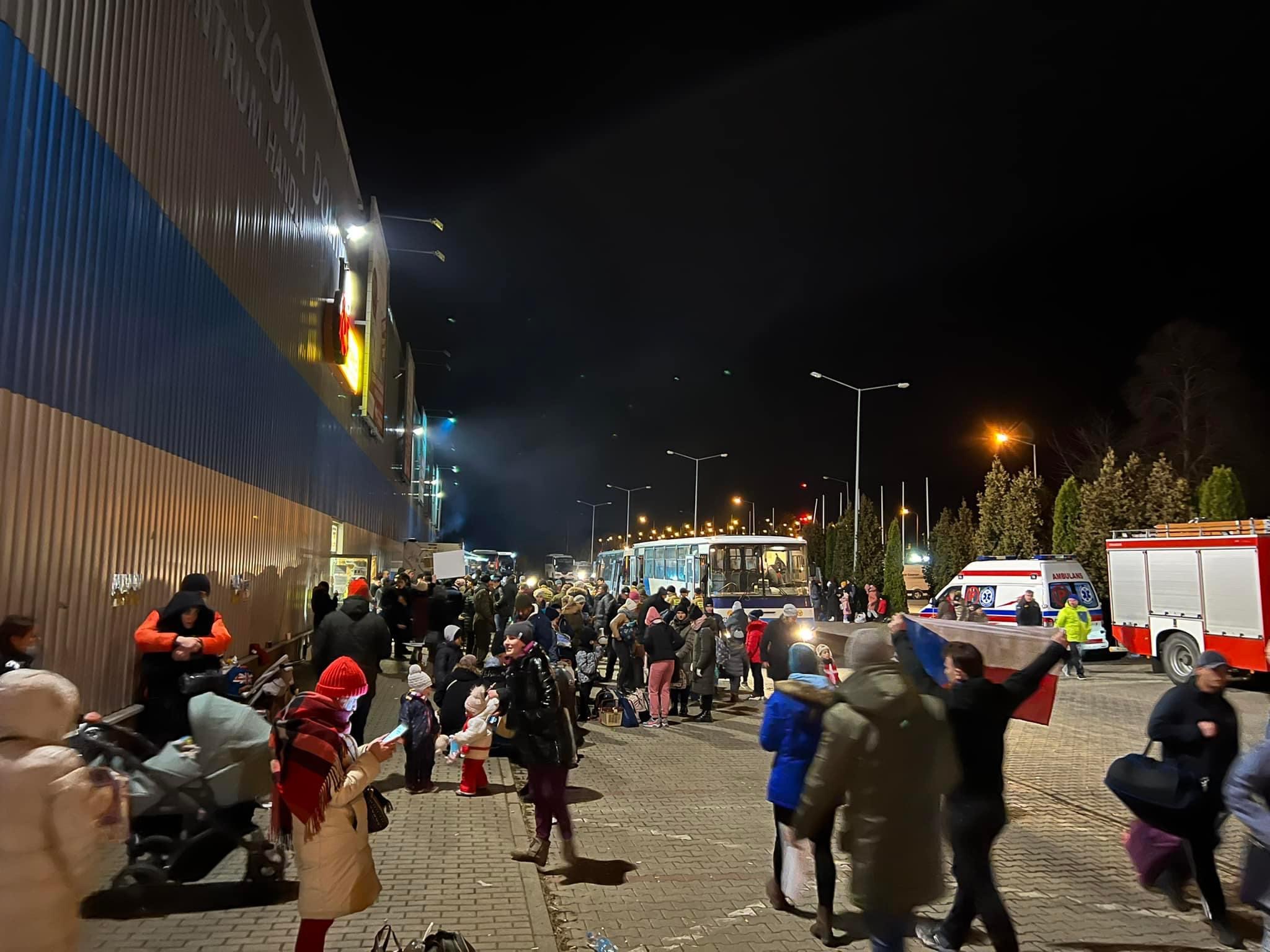 With his current role and in previous sales, financial and recruitment industries, and in working for the US Embassy in Poland, Pressello knew he needed to maximize impact for that donor dollar.

He had attempted to purchase supplies in bulk from Amazon, but thanks to algorithms on mass-quality purchases, the website was “overwhelmed, got wonky and canceled orders.”

So he reached out several supply companies and to Viking alumnus and classmate Tom Slater (BA 1995), who works for a Chicago medical supply company—when he’s not playing piano and keyboards in Windy City bands, that is—and was able to secure all of the supplies that he needed to bring back.

Then it was a question of getting it all on a plane back home and, eventually, to a humanitarian relief-staging center in the Polish city of Chelm, near the Poland-Ukraine border. From there, Ukrainian authorities in Kyiv would distribute to civilian and military entities as needed.

“If you’ve ever been through Customs and Immigration, you’ll note there is a green door and a red door once you land,” Pressello laughed.

“If you have nothing to declare, you go through the green door and it’s usually smooth sailing. I went through that red door, following the rules as you do,” he said. “And there were many questions. If you know anyone who wonders what happens back there, have them call me. I can tell them. It’s a trip.”

After passing the intense security scrutiny, it was on to get the supplies into the right hands. A Ukrainian Directpl office coordinator with family in a small-town east of Kyiv and contact at a local hospital would help him connect supplies with battlefront- and refugee camp destinations. 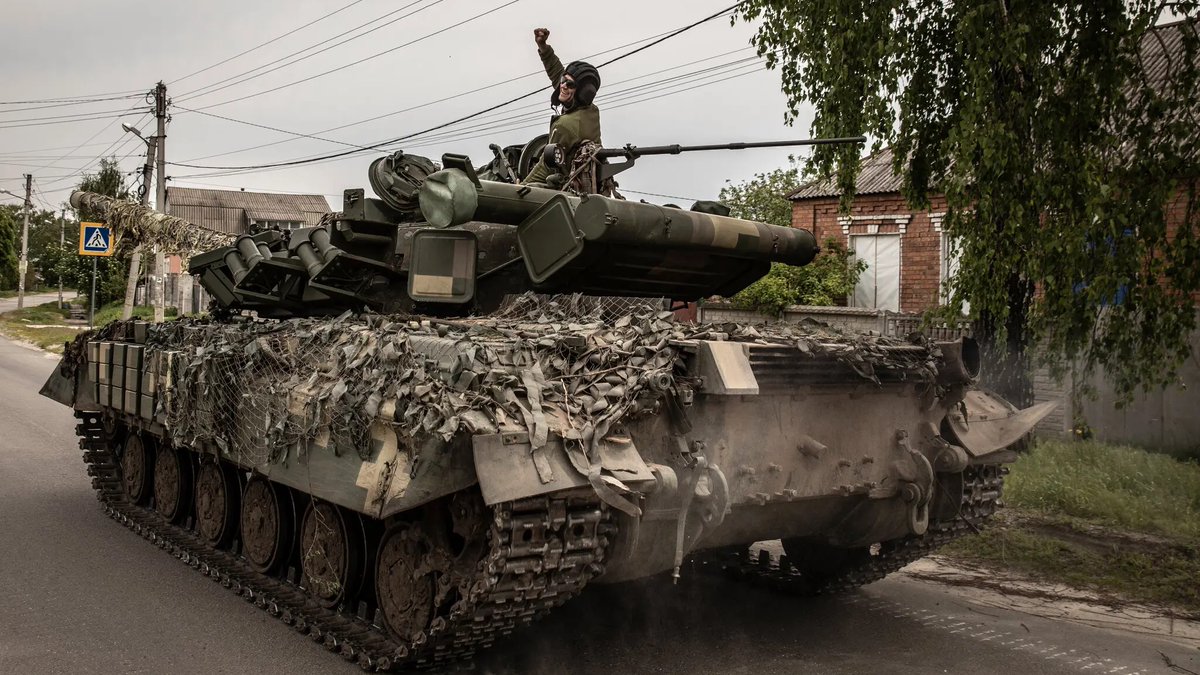 Pressello and his employees have continued to volunteer shifts at refugee centers and while he’s not ruled out future supply drives, the surge of refugees has certainly occupied his time in other ways.

“I didn’t think anything could be more moving,” he said, encouraging everyone reading this to “get involved in any way that you can” and that it matters. “But I’ve been moved repeatedly in this entire experience and I feel changed. And all the CSU tie-ins, even this conversation, aren’t lost on me.

“Many people see world crises in abstract,” Pressello said. “But I can tell you from first-hand experience, even small donations of time, effort, money and expertise make lasting impacts.

“We have people [at Directpl] volunteer shifts at refugee centers after working a regular day. And you’re telling them, ‘Hey man, you’ve got to sleep!’ But they know that what they’re doing matters. They have families. They know history. They see what is happening and are doing all of this on their own accord.

“This is something that cannot be overstated: get involved. You can change the world you live in,” said Pressello, with reference to recent commencement exercises on campus.

“If you want to tell CSU students, faculty, staff, alumni—anyone there—how to affect real change? Get involved. It’s already a big part of the culture there and it’s really that simple. Find your mission and get involved. Engaged Learning is real.”