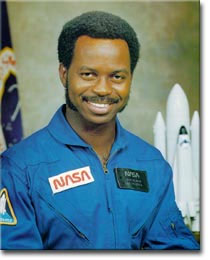 Ronald E. McNair was born on October 21, 1950 in Lake City, South Carolina. Showing an interest in science from an early age, Ronald notably defied the segregated society of the south at the age of nine, defiantly going to a library earmarked for “whites only” to demand the advanced texts he would need to pursue his passion. He eventually graduated from Carver High School in Lake City, South Carolina in 1967 and earned a B.S. in Engineering Physics at North Carolina A&T State University (N.C. A&T) in 1971. He then entered a Ph.D. program in Physics at the Massachusetts Institute of Technology (MIT), and during his studies there, he was instrumental in the development of early chemical high-frequency direction finding (HF/DF) and high pressure carbon dioxide lasers.
McNair’s experiments and theoretical analysis regarding the interaction of intense CO2 laser radiation with various molecular gases resulted in a new understanding of and new applications for excited polyatomic molecules, and in 1975, he studied laser physics with a number of authorities at the École de Physique in Les Houches, France. Throughout his academic career, he published numerous papers on the topics of lasers and molecular spectroscopy and gave many presentations on these topics both in the United States and abroad.
Following his graduation from MIT in 1976, he acquired a position as a staff physicist with Hughes Research Laboratories in Malibu, California. Here, he worked on the development of lasers for isotope separation and photochemistry utilizing non-linear interactions in low-temperature liquids and optical pumping techniques. A 5th degree black belt karate instructor, McNair additionally channeled his passion for martial arts into his research, seeking to explore the scientific foundations of the discipline.
Dr. McNair was selected by NASA as an astronaut candidate in 1978. He completed a one-year training and evaluation period in August of 1979, rendering him eligible for assignment as a mission specialist on space shuttle flight crews. He first flew on Challenger mission STS 41-B on February 3, 1984, making him the second African-American to enter space. This mission was notable as the first flight of NASA’s Manned Maneuvering Unit, and McNair was the first astronaut to use the Canadian arm to position Extravehicular Activity (EVA) crewmen around Challenger’s payload bay. In addition to his duties as a mission specialist, McNair also took the opportunity to play his saxophone in orbit. An accomplished jazz saxophonist, he would go on to collaborate with Jean Michel Jarre, and he intended to perform the first solo recording of an original song in space during the course of mission STS-51-L.
Tragically, STS-51-L was to be the mission that terminated in the explosion of the Challenger shuttle. Dr. McNair died at the age of thirty-five on January 28, 1986 when Challenger broke apart after its launch from Kennedy Space Center, Florida. Alongside him perished astronauts Francis R. Scobee, Michael J. Smith, Ellison S. Onizuka, and Judith A. Resnik, in addition to civilian payload specialists Gregory B. Jarvis and Christa McAuliffe. McNair is survived by his wife Cheryl and his two children.
Sources
"Astronaut Bio: Ronald E. McNair 12/03." Nasa.gov. National Aeronautics and Space Administration, Dec. 2003. Web. 19 Jan. 2016.
"Astronaut's Brother Recalls A Man Who Dreamed Big." Npr.org. NPR StoryCorps. 28 Jan. 2011. Web. 19 Jan. 2016.
Fernborn, Hugo. "The History of Synthpop." Synt.nu/history. 29 Oct. 2015. Web. 19 Jan. 2016.